The 5-foot-9, 212-pound Arrington had been thought to be the Cardinals' likely No. 1 running back next season, ahead of Tim Hightower and Edgerrin James.

This off-season, the Broncos have signed 11 free agents after missing the post-season the past three years.

In four seasons with Arizona, Arrington, a former collegiate star at California, has scored three touchdowns on 183 carries for 654 yards. He has added two touchdowns on 91 receptions for 693 yards.

The Denver Post reported late Wednesday that running backs Michael Pittman and Tatum Bell likely will not return next season.

Among Denver's other free-agent signings are safeties Brian Dawkins and Renaldo Hill and linebacker Andra Davis. 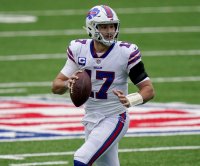