Safina, who was last year's French Open and Olympic runner-up, meets fellow Russian Vera Dushevina next. Dementieva, who won the gold medal in Beijing last year and is coming off a win at the ASB Classic, faces Slovakian wild card Jarmila Gajdosova.

MLB // 4 hours ago
MLB playoffs: Schwarber slams Red Sox past Astros, to 2-1 ALCS lead
Oct. 19 (UPI) -- Kyle Schwarber's 430-foot grand slam was one of four Boston Red Sox homers in a blowout of the Houston Astros in Game 3 of the ALCS. The 12-3 triumph gave Boston a 2-1 lead in the best-of-seven series.

NBA // 12 hours ago
NBA projects $10 billion in revenue for 2021-22 season as audiences return
Oct. 18 (UPI) -- The NBA is projecting $10 billion in revenue for the upcoming 2021-22 season as audiences continue to return, a notable increase from the last two seasons when fan attendance was limited or disallowed due to COVID-19. 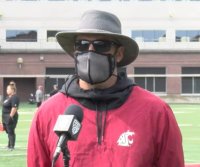 Sports News // 17 hours ago
SEC fines Tennessee Volunteers $250K after fans throw debris during Ole Miss game
Oct. 18 (UPI) -- The SEC announced Monday it has issued the University of Tennessee a $250,000 fine in the aftermath of Volunteers fans throwing bottles and other debris on the field near the end of the team's 31-26 loss to Ole Miss.
Advertisement