DENVER, Jan. 3 (UPI) -- Rich Nash had a goal and three assists Friday and the Columbus Blue Jackets overwhelmed Colorado 6-1, but Steve Mason gave up his first goal in four games.

Mason had recorded a shutout in each of his last three starts and was named Friday the NHL's top rookie for the month of December. He made 23 saves Friday, but his franchise-record shutout streak ended at 199 minutes, 28 seconds when Darcy Tucker scored with 2:40 to play in the first period.

Nash assisted on Kristian Huselius' game-tying goal early in the second period and then Nash scored on a penalty shot to give Columbus the lead for good.

Columbus won its fourth straight game, the Blue Jackets' longest such streak of the season.

Colorado had a three-game winning streak snapped and lost at home for just the second time in eight contests. 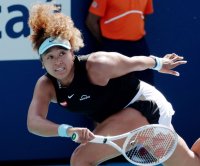 Sports News // 1 hour ago
World No. 2 Naomi Osaka withdraws from Wimbledon, aims for Olympics
June 17 (UPI) -- Naomi Osaka, the second-ranked women's player in the world, has withdrawn from the Wimbledon tennis tournament, according to a statement released by her agent Thursday.

Sports News // 7 hours ago
Tennis champ Rafael Nadal skipping Wimbledon, Tokyo Olympics to 'recover'
June 17 (UPI) -- World No. 3 and 2008 Olympic gold medalist tennis champion Rafael Nadal announced Thursday that he will not play at Wimbledon this month or the Summer Games in Tokyo next month.