The final outcome of his case is pending a hearing before NHL Commissioner Gary Bettman.

Fox News reported that following a morning skate in Calgary, Alberta, Tuesday Avery approached a group of reporters, asked if a camera was present and then said: "I'm really happy to be back in Calgary; I love Canada. I just want to comment on how it's become like a common thing in the NHL for guys to fall in love with my sloppy seconds."

Two of Avery's ex-girlfriends, actresses Elisha Cuthbert and Rachel Hunter, have been linked to other NHL players.

"I completely support the league's decision to suspend Sean Avery," said Stars owner Thomas O. Hicks. "Had the league not have suspended him, the Dallas Stars would have. This organization will not tolerate such behavior, especially from a member of our hockey team. We hold our team to a higher standard and will continue to do so."

Avery, 28, signed a four-year contract worth $15.5 million during the summer after spending the past one-plus seasons with the New York Rangers. He has three goals and seven assists in 23 games this season. In 402 career games with the Red Wings, Kings, Rangers and Stars, Avery has 68 goals, 177 points and 1,144 minutes in penalties. 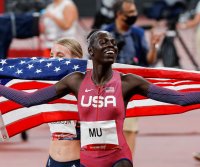 Soccer // 13 hours ago
Alex Morgan 'devastated' by U.S. soccer loss, Alyssa Naeher out for bronze medal game
Aug. 3 (UPI) -- U.S. women's soccer star Alex Morgan noted her frustration about the team's semifinal loss Tuesday on social media, but was one of several American players to say her goal is to bring home a bronze medal.