After pondering retirement this off season, the team's captain signed a one-year contract.

No dollar figures were disclosed, but the Rocky Mountain News reported the deal was worth $6 million, or $750,000 less than Sakic was paid last season.

He compiled 40 points by scoring a career-low 13 goals with 27 assists and is the franchise's all-time scoring leader.

"Ultimately it came down to the fact that I still enjoy playing and competing," Sakic said in a statement. "I'm comfortable with my conditioning and my overall health. I'm ready for the start of camp and am looking forward to the upcoming season."

Soccer // 18 minutes ago
U.S. women expected to beat New Zealand, stay alive in Olympic soccer
July 23 (UPI) -- New Zealand will see a motivated United States Women's National Team, which sustained a rare loss in its last match, when the teams meet in the group stage of the 2020 Summer Games on Saturday in Saitama, Japan. 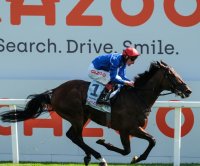 Sports News // 3 hours ago
Love, Mishriff, Adayar in showdown in England
July 23 (UPI) -- Some excellent weekend horse racing around the globe features a crackerjack renewal of the King George VI and Queen Elizabeth Stakes at Ascot in England.