WASHINGTON, July 8 (UPI) -- Brandon Webb got his major league-best 13th victory Tuesday while pacing the Arizona Diamondbacks to a 2-0 win over the Washington Nationals.

Webb (13-4), who has now pitched 25 consecutive scoreless innings against Washington dating back to 2007, threw six shutout innings on six hits. He has won four consecutive starts against the Nationals, allowing one run in 31 innings in those games.

Chris Young was the only player in the game with an RBI, singling home a run in the third.

Washington pitcher Odalis Perez (2-6) worked only 2 2/3 innings before being ejected. He got the loss after allowing one unearned run on one hit. 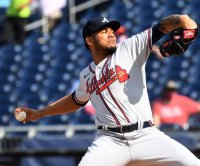