PITTSBURGH, June 11 (UPI) -- Ryan Doumit had a homer among his three hits Wednesday and Pittsburgh got three hitless innings from its bullpen to down Washington 3-1.

Pittsburgh starter Ian Snell (3-6) took a shutout into the seventh inning before giving up a run. Snell left the game with nobody out and runners on first and second, but Damaso Marte came on to escape the jam.

Tyler Yates walked two in the eighth, but did not allow a run and Matt Capps appeared in the ninth for his 16th save.

Doumit has seven hits in the last two games and he helped the Pirates win for the third time in four outings.

The hard-luck loser was John Lannan (4-7), who gave up just two runs on seven hits in six innings. Washington has dropped five of six.

The teams combined to leave 21 men on base. 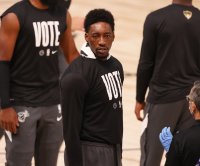