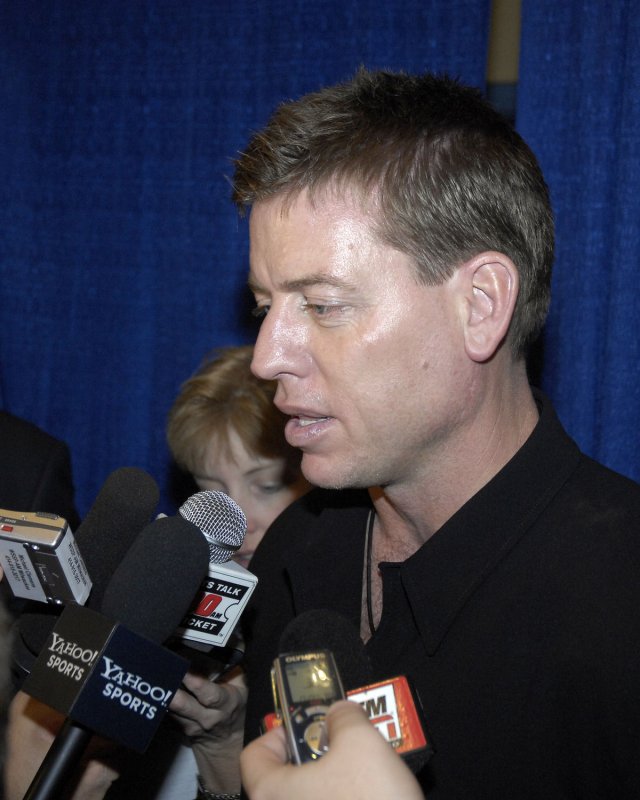 Quarterback Troy Aikman of the Dallas Cowboys is on hand to congratulate former teammate wide receiver Michael Irvin, who was selected to the Pro Football Hall of Fame during a press briefing in Miami on February 3, 2007. (UPI Photo/Joe Marino-Bill Cantrell) | License Photo

Aikman, who played quarterback for Oklahoma and UCLA, was among 13 players selected along with coaches Lou Holtz and John Cooper will all be inducted in ceremonies Dec. 9 in New York. Enshrinement in the South Bend, Ind., hall itself was set for the summer of 2009.

Aikman, an NFL star with the Dallas Cowboys, won the Davey O'Brien Award as the nation's top collegiate quarterback in 1988 and led the Bruins to two bowl victories.

Holtz racked up 249 wins as a coach at six schools. He led Notre Dame to the national championship in 1988.

Cooper had a 192-84-6 record and 14 bowl game appearances over 24 seasons at Tulsa, Arizona State and Ohio State. He is second to Woody Hayes in wins at Ohio State.

Soccer // 19 hours ago
Germany stays alive, Spain nears knockout after 1-1 tie
Nov. 27 (UPI) -- Spain took another step toward advancing in the 2022 World Cup thanks to a second-half goal by Alvaro Morata, but Germany kept itself alive with a late goal to tie 1-1.

Soccer // 1 day ago
U.S. soccer edits Iranian flag on social media in support of protesters
Nov. 27 (UPI) -- The U.S. soccer team showed support for Iranian protestors by removing the emblem of the Islamic Republic from a graphic ahead of its game against Iran in the World Cup group stage.