New York Knicks head coach Larry Brown yells for his team to get back on defense against the Indiana Pacers at Conseco Fieldhouse in Indianapolis, In March 7, 2006. (UPI Photo/Mark Cowan) | License Photo

He owns a 1,010-800 NBA coaching record and was inducted into the Basketball Hall of Fame in 2002. He is the only coach to take seven teams to the NBA playoffs and his championships at Detroit (2004) and Kansas (1988) make him the only coach to win bot the NBA and NCAA titles.

"I've been out of basketball two years as a coach, and I realized how much I loved it and how much I missed it," said Brown. "When Michael (Jordan) talked to me about coming here I thought it was a no-brainer."

He replaces Sam Vincent, who was fired after one season leading the Bobcats, who were 32-50 this season.

Sports News // 1 hour ago
Love, Mishriff, Adayar in showdown in England
July 23 (UPI) -- Some excellent weekend horse racing around the globe features a crackerjack renewal of the King George VI and Queen Elizabeth Stakes at Ascot in England. 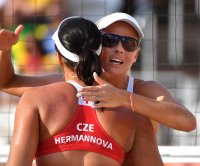