WASHINGTON, April 4 (UPI) -- A 29-point performance by Caron Butler Friday lifted the Washington Wizards to a playoff-clinching 109-95 victory over Miami.

The Wizards -- who ended a three-game losing streak -- will take part in the playoffs for the fourth straight year and are currently tied for the fifth seed in the Eastern Conference.

Andray Blatche came off the bench to score 17 points and Brendan Haywood had 14. In his second game back since recovering from knee surgery that caused him to miss 66 contests, Gilbert Arenas scored 13 points and handed out eight assists.

Ricky Davis scored 33 for Miami, which set a franchise record with 19 three-point field goals. Davis made nine of 12 tries from long range. 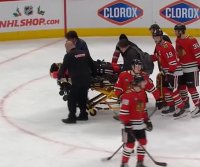