NEW YORK, Dec. 21 (UPI) -- A plan to combine a new home for the New Jersey Nets -- in New York City -- with a high-rise development in downtown Brooklyn has a green light.

Ratner threw in some sweeteners, including a high-tech high school and an increase in the amount of affordable housing in the mix. But many residents and politicians plan to continue fighting the project. They say it will put too much high-density pressure on a neighborhood that is now mostly blocks of brownstones. 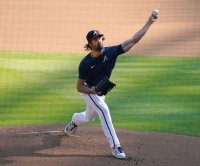 Sports News // 11 hours ago
USA's Nelly Korda among leaders in women's Olympic golf tourney
Aug. 4 (UPI) -- Team USA's Nelly Korda carded a 4-under par 67 to finish one stroke back of leader Madelene Sagstrom of Sweden in the first round of the 2020 Summer Games women's golf tournament Wednesday in Saitama, Japan.

Sports News // 15 hours ago
USA baseball powers past Dominicans to land in Olympic semifinals
Aug. 4 (UPI) -- Team USA advanced to the Olympic semifinals in men's baseball on Wednesday by defeating the Dominican Republican with a pair of home runs and solid defensive play.