"It means everything to me that I am being honored as a coach," Madden said this week.

White was an all-pro 13 times. 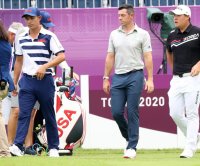 Sports News // 19 hours ago
Austria's Sepp Straka ties Olympic record, leads men's golf at Tokyo Games
July 29 (UPI) -- Austria's Sepp Straka turned in a dominant round on the first day of Olympic golf, firing a bogey-free 8-under-par 63 on Thursday to sit alone atop the leaderboard on a day that saw rain and lightning suspend play.
Advertisement