NEW ROCHELLE, N.Y., May 20 (UPI) -- Hee Jung Park fired a 4-under 67 Saturday to take a one-shot lead over Annika Sorenstam after two rounds of the Sybase Classic at New Rochelle, N.Y.

Park goes into the final round at 4-under 138 with a shot at her third LPGA victory.

Heavy rain delayed play on Thursday, and the first round was suspended again Friday without a shot being taken, so tournament officials decided to shorten the event to 54 holes.

Fifteen players finished their opening round Saturday morning, and the weather cooperated the rest of the day.

Sorenstam, one week after missing the cut for the first time in four years, took advantage by matching Park's 67 to get to 3-under 139.

"Obviously I'm happy. I get to play Sunday and that's a good thing," said Sorenstam, before joking, "I've improved from last week."

Allison Hanna bogeyed two of her final three holes and finished with a 71 for the day, alone in third place at 2-under 140. 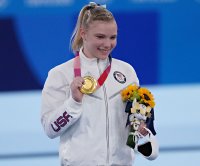 Soccer // 7 hours ago
Canada shocks U.S. women's soccer team to advance to Olympic final
Aug. 2 (UPI) -- Jessie Fleming netted a 75th-minute penalty kick Monday to lift Canada to a 1-0 upset of the U.S. Women's National Team in the soccer semifinals of the 2020 Summer Olympics in Tokyo.