Labonte, a 13-year NASCAR veteran who is 25th in the overall standings, has earned 21 wins -- all at Joe Gibbs Racing, his current sponsor -- but has not won a race since Homestead 2003. He has grabbed 26 poles in his career.

Labonte is not a contender in the Chase for the Nextel Cup.

"I'm really pleased to be part of Petty Enterprises," said the 2000 series champion on the team's Web site. "To have the opportunity to drive Richard Petty's No. 43 car is something I could not have imagined growing up."

Petty Enterprises last won in 1999 at Martinsville with John Andretti driving. Since its inception in 1949, the team has recorded 268 wins. Team owner and president Richard Petty, who is retired, won 200 times in his racing days. 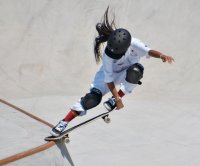 Sports News // 13 hours ago
USA's Nelly Korda among leaders in women's Olympic golf tourney
Aug. 4 (UPI) -- Team USA's Nelly Korda carded a 4-under par 67 to finish one stroke back of leader Madelene Sagstrom of Sweden in the first round of the 2020 Summer Games women's golf tournament Wednesday in Saitama, Japan.