HUMBLE, Texas, April 23 (UPI) -- Steve Stricker, Steve Lowery and Zach Johnson shared the lead Friday when play was halted by darkness in the second round of the Houston Open.

Afternoon storms forced a suspension of play for almost two hours and 36 players were unable to complete the round.

The co-leaders were at 5-under 139 and it appeared that when the cut is made on Saturday, no one playing on the weekend will be more than six shots off the pace.

Paul Azinger shot the day's best round, a 5-under 67, that left him at 140 along with Patrick Sheehan and Vijay Singh.

John Riegger and Neal Lancaster were also at 4-under, but neither had completed play and both had a chance to share the lead when the second round is completed early Saturday.

After shooting a 75 Thursday, John Daly rallied with a 70 to make the 36-hole cut. 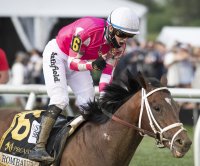