Winless in their first four meetings with Nashville this season, the Blue Jackets engaged in three fights in a four-second span early in the first period. Columbus took advantage of several miscues by the Predators to take a three-goal lead after 20 minutes.

Malhotra made it 2-0 with tallies 1:42 apart midway through the period and defenseman Jaroslav Spacek was credited with his second of the season less than four minutes later.

Ling ended a 47-game drought in the third to complete the scoring for Columbus, which snapped a seven-game winless streak against Nashville.

Greg Johnson and David Legwand scored for the Predators, who acquired right wing Steve Sullivan from Chicago during the game.

Sports News // 52 minutes ago
Tiger Woods, Phil Mickelson planning rematch including Tom Brady, Peyton Manning
April 2 (UPI) -- Star golfers Tiger Woods and Phil Mickelson are in talks to have a televised rematch after battling in a 1-on-1 matchup in 2018. 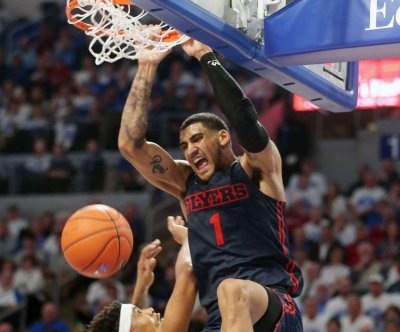