The ouster was reported by the Seattle Post-Intelligencer, which said Neuheisel was fired Tuesday by Athletic Director Barbara Hedges for breaking NCAA rules prohibiting gambling. According to numerous reports, he has admitted to entering high-stakes gambling pools during the last two NCAA men's basketball tournaments.

The paper said Neuheisel invested $6,400 and won $12,123 during his two years participating in the pools.

Neuheisel told Sporting News Radio on Wednesday that he had not been fired.

"To my knowledge, I am still the coach at Washington," Neuheisel said. "Athletic Director Barbara Hedges has stated publicly that it is still an ongoing investigation, which is what I have been asking for all along. When news like this hits, it becomes kind of like a wild fire, and it sometimes gets out of control."

Neuheisel went 33-15 in four years at Washington. Prior to that, he had been at Colorado. 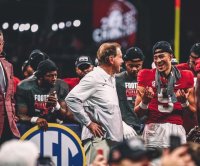