Tampa Bay went on its second power play after regulation when Washington was penalized for having too many men on the ice.

St. Louis cashed in with his third straight game-winner. After getting a pass behind the net from Vincent Lecavalier, the speedy All-Star moved out front, spun at the bottom of the right faceoff circle and wristed a shot over the left shoulder of goaltender Olaf Kolzig.

"I made a bad pass, Vinny made a great play to stay with it," St. Louis said. "He got it back to me and I was able to jump right on it. I just tried to go high because you know (Kolzig's) going to go down into the butterfly."

As St. Louis pumped his fist along the boards, he was mobbed by teammates. After losing the first two games of the series at home, the Lightning won four straight and will face the New Jersey Devils in the conference semifinals.

"It's a huge thing for the organization, but I'm concerned with those 26 guys right now," Tampa Bay Coach John Tortorella said. "It's a great stepping stone for those guys, the core people, the young people who have only been around three or four years."

It was another postseason collapse by the Capitals, who have been knocked out in the first round in each of their last three playoff appearances. They also blew two games to none leads in the first round against Pittsburgh in 1992 and 1996 and to the New York Islanders in 1985.

"I was just in the locker room, shaking my head. We found ways to beat ourselves this series and tonight it was too many men on the ice," Washington first-year Coach Bruce Cassidy said. "You have to look at the way we lost these games and say to yourself that some things are just not meant to be."

Tampa Bay would not have had a chance to improve to 4-0 all-time in playoff overtime if not for 39-year-old captain Dave Andreychuk. With 4:06 to go in regulation, the most prolific power-play goal-scorer in NHL history got another.

Just 33 seconds after Capitals defenseman Sergei Gonchar was penalized for taking down Fredrik Modin, a shot from the top of the left circle by Tampa Bay's Brad Richards hit the skate of Washington defenseman Ken Klee.

It caromed to Andreychuk, who wristed the puck over Kolzig's outstretched right arm for his second goal of the series.

"(Plays) 36 minutes, scoring the tying goal, what can you say?" Tortorella asked. "I was concerned about him in the second and third period, but he wanted to play. He wouldn't even look at me. He's our role model, he's our leader. Just a huge game."

Tampa Bay's Nikolai Khabibulin made 60 saves and made sure the game reached overtime with a right pad stop on Robert Lang with a minute to go.

"That was the longest game I played ever," Khabibulin said. "I was seeing a lot of shots. I wasn't thinking about where they were coming from, I just tried not to panic."

Kolzig stopped 44 shots and prolonged the outcome 7 1/2 minutes into the first overtime when he denied Lecavalier from close range and used his skate to get a piece of the rebound, sending it off the left goalpost.

"Khabibulin got better as the series went on and tonight, obviously, was his pinnacle," Kolzig said. "He was the reason they even got to overtime. That's what you need to advance in the playoffs and he provided that for them tonight. It was kind of bad timing. It was probably our best game of the series as well."

The Capitals had a 13-5 advantage in shots in a scoreless first period but broke through on a power play with 2:26 to go in the second.

With 76 seconds left on Ben Clymer's roughing penalty, Peter Bondra got a feed from Gonchar and ripped a one-timer through the legs of teammate Dainius Zubrus, past a helpless Khabibulin and inside the left post.

Khabibulin kept the Lightning within striking distance, even while they managed just one shot during a 13-minute stretch bridging the first two periods. He stopped Ivan Ciernik and Bondra on 2-on-1s and got his right pad on Jeff Halpern's 15-foot wrist shot during a power play early in the third.

"He gets a couple wins and you could see him slowly come back," Tortorella said of his goalie. "You could see how confident he was. He played he angles, he kept himself square. But Kolzig played great, too. It was a great game to be involved in." 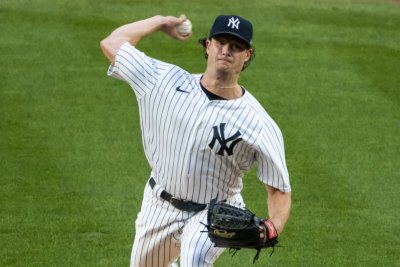