It was the opener of their Western Conference quarterfinal series.

Kariya, the greatest player in franchise history, came up with one of his biggest goals. After a shot by defenseman Niclas Havelid from the right point hit teammate Mike Leclerc in front of the net, the puck caromed off the skate of Detroit's Sergei Fedorov to the edge of the right faceoff circle.

Kariya got to it and put a wrist shot past the stick of goaltender Curtis Joseph for his ninth career playoff goal, and second game-winner.

It instantly gave home-ice advantage in the best-of-seven series to the Mighty Ducks, who were outshot, 64-44, including a 36-13 margin after regulation.

"It was a nice feeling," Kariya said. "The game belonged to Jiggy. He was incredible today. They really outplayed us a lot of the game and he kept us in and let us win the game."

"There was a shot from the point that never made it through," Joseph said. "It hit something in front and, unfortunately, it just laid in the right spot and Kariya had time. "He made a great lateral move and made a good shot."

Giguere continually frustrated the Red Wings, who swept the Ducks in their first two playoff meetings. The 63 saves set an NHL record for a goaltender making his postseason debut.

Game Two is Saturday in Detroit, where the Red Wings dropped the first two games of last year's conference quarterfinals before beginning their march to another Stanley Cup championship. 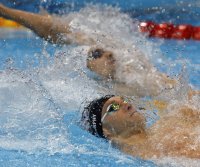 Soccer // 18 hours ago
Olympics: Alyssa Naeher leads U.S. past the Netherlands in soccer quarterfinal
July 30 (UPI) -- Goalie Alyssa Naeher provided clutch saves in extra time and a penalty shootout to spark a win over the Netherlands and send the U.S. women's soccer team to the 2020 Summer Games semifinals Friday in Yokohama, Japan.