SAN ANTONIO, March 30 (UPI) -- T.J. Ford scored 19 points and handed out 10 assists Sunday as the top-seeded Texas Longhorns reached the Final Four for the first time in 56 years with an 85-76 victory over No. 7 Michigan State in the NCAA Tournament's South Region final.

Texas (26-6) became the only top seed to survive a regional final after Kentucky, Arizona and Oklahoma all fell.

Ford was widely recruited out of Houston and shocked the college basketball world with his commitment to Texas over a host of basketball powers. Coach Rick Barnes, who earned his first trip to the Final Four, said that Ford has given his program credibility.

"It's special because you're living the dream," Barnes said. "It's what you talked about during the recruiting process. I know how hard he's worked. Last year in Madison, Wis., he actually had tears in his eyes (after a regional semifinal loss to Oregon)."

Barnes sold Ford on Texas with a goal of reaching the Final Four.

"That was his goal," Ford said. "Knowing that they had a great program building, they were hard working. This was a program I wanted to be part of."

Barnes has complained throughout the season about the lack of support for his team on campus, where football reigns supreme. But a crowd of over 33,000 fans just 80 miles away at the Alamodome provided Texas with an advantage it put to good use.

"I love coach," Ford said. "To be a one seed and make it, watching everyone drop off as one seeds the last couple days, it was just a great moment to know we're going to New Orleans. It was very important for his career, and our career as players."

"T.J.'s a very emotional person," Barnes said. "The hug was heartfelt. It's one of those deals that my wife would probably like me to hug her like that."

Brandon Mouton scored 16 points and Brian Boddicker added 15 for Texas, which took control spurt midway through the first half and never looked back. The jet-quick Ford did his part by leading the offense and keeping mistakes to a minimum.

"I love the way he plays," Izzo said. "He knows his limitations and he knows his strengths. He's got character."

Texas made 24 of 30 free throws in the second half to cement the victory. Mouton made two free throws and Royal Ivey and Ford each split a pair to account for the game's final four points.

"We've had different guys all year do different things for us," Barnes said. "Our team had great respect in knowing Michigan State would never go away."

Michigan State (22-13) was denied a fourth Final Four appearance in five years. The Spartans were bidding to join Virginia in 1984 as the only No. 7 seeds to reach college basketball's biggest stage.

Freshmen Paul Davis and Erazem Lorbek combined for 29 points for Michigan State, which committed 12 turnovers that led to 16 points for Texas.

"I felt like we didn't play well today," Izzo said. "Between the turnovers, lack of defense, them shooting the ball well, the game went how it is going to go."

After Adam Ballinger's basket gave the Spartans a 16-13 advantage, Ford had a layup and Sydmill Harris made a pair of three-pointers in a 12-3 surge as Texas seized a 25-19 lead. Boddicker's three-pointer at the 5:51 mark opened up its largest lead, 35-24.

"Those shots just came to me," Boddicker said. "With T.J.'s penetration, sometimes I get lost in transition."

Michigan State closed the half with an 8-2 spurt to get within 43-38 at the break. Freshman Brad Buckman scored four straight points to give Texas a 51-41 advantage 3:40 into the second half.

While the Spartans closed within five points on six occasions, Ford helped keep them at bay by constantly getting to the line. Ford made 10 of 12 from the stripe in the second half.

"He didn't shoot it very well," Spartans guard Chris Hill said. "But he got to the free-throw line 13 times so he did what he had to do."

Texas shot 49 percent and Boddicker and Harris came off the bench to make five three-pointers. The Longhorns survived a foul-plagued effort by James Thomas, who led the team with seven rebounds in 15 minutes.

Hill and freshman Maurice Ager each scored just 10 points for Michigan State, which starts Lorbek and three sophomores around senior forward Aloysius Anagonye. Davis is expected to take his spot in the lineup next season.

"We had a great run, but I'm not sure we're where we want to be," Izzo said. "I don't think we have an identity yet. If you haven't won any championship, you can't put any mark into that."

Sports News // 15 hours ago
Kyle Larson extends hot streak, wins NASCAR All-Star Race
June 14 (UPI) -- Kyle Larson pulled his No. 5 Chevrolet across the finish line first for the third-consecutive event at NASCAR's All-Star Race to extend the most dominant run of the 2021 season. 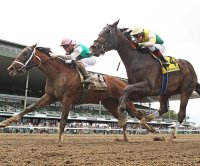