ANAHEIM, Calif., March 27 (UPI) -- Rick Anderson and Hassan Adams highlighted an 22-3 run in the middle portion of the first half Thursday night, sending the top-seeded Arizona Wildcats coasting to an 88-71 victory over Notre Dame in the West Region semifinals of the NCAA Tournament.

In a fast-paced contest, Notre Dame stayed with Arizona through the first eight minutes by hitting 11 of 16 shots.

That gave the Fighting Irish a 26-25 advantage, but Adams made two layups to ignite the decisive stretch as Notre Dame could manage only one field goal over a four-minute span.

Anderson scored six points during the Arizona run and Luke Walton finished it off with a pair of baskets to give the Wildcats a 47-29 cushion with six minutes to play in the first period.

Notre Dame fought back to within 53-40 at the half, but came no closer than 10 points during the final 20 minutes.

Arizona guard Jason Gardner flawlessly ran the offense as the Wildcats hit 56 percent of their shots in the first half and committed just one turnover.

Gardner finished with 19 points to lead five players in double figures for the Wildcats (28-3).

Notre Dame sophomore Chris Thomas scored 20 points, but did most of his scoring in the second half when the game already was out of hand.

Freshman Torin Francis made 10 of 11 shots and finished with 25 points to lead the Fighting Irish (24-10), who failed in their bid to advance to a regional final for the first time since 1978.

Notre Dame became the first Big East team to fall in nine games in the NCAA Tournament. The Irish also suffered their worst NCAA Tournament loss since an 89-56 defeat to Kentucky in the 1958 Mideast Regional final.

"We got beat by a heck of a basketball team," Notre Dame Coach Mike Brey said. "I'm very impressed with Arizona. We were going to have to score more than 71 points to make it interesting. I'm so impressed with their older guys -- Anderson, Gardner and Walton. They placed with such a nice tempo. They don't panic and they're so skilled."

After needing two overtimes to post a dramatic 96-95 victory over Gonzaga in the second round, the Wildcats looked like they might be part of another scintillating game in this one.

With a lack of regard for defense on both ends, the teams combined for 35 points before the first timeout. A three-pointer by Salim Stoudamire gave the Wildcats a 19-16 with 14:23 left in the opening half.

"It was obvious early in the game that it was going to be a track meet," Arizona Coach Lute Olson said. "Both teams came out ready to go, but relaxed. Anytime you see teams come out and shoot the ball the way both teams shot it early, you know they're ready to play."

Early on, the Wildcats pounded the ball inside after Irish big man Tom Timmermans picked up two fouls. Channing Frye took advantage for the Wildcats as he made his first five shots.

Frey and Rick Anderson led a big effort by the Wildcats' big men. Frey had 14 points and 12 rebounds and Anderson nine and 12 boards. Arizona scored 38 points in the paint, compared with 26 for Notre Dame.

"The refs called an awesome game," Frey said. "They let us bang and be physical throughout the game."

Soccer // 11 hours ago
U.S. women's soccer equal pay trial delayed due to pandemic
April 8 (UPI) -- The trial date for the equal pay lawsuit by the United States Women's National Team against the U.S. Soccer Federation has been delayed a month due to the coronavirus pandemic. 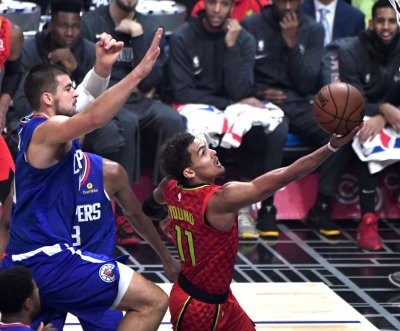