Chang, who will retire after the U.S. Open in August, opened his 15th year on the ATP circuit with a loss to Agassi by the same score at the Siebel Open in San Jose.

The 31-year-old American played his final match at this event, in which he participated 12 times and won in 1992. He was rewarded by the appreciative packed crowd at Crandon Park.

"I know that whenever I walk off the court, whether I've won or lost, it's been enjoyable for me," Chang said. "There are many tournaments that have meant a lot to me over the years. It's special to come back to a tournament where you feel welcome."

The second-seeded Agassi improved to 15-7 lifetime against Chang. He put to rest rumors he was going to pull out with a bad shoulder that kept him from playing last week in Indian Wells.

"I wasn't too hopeful coming here on Monday, hitting balls for the first time," said Agassi, who is seeking his third title of the year and third straight crown here.

"If the tournament had started for me three days sooner, I probably would not have been able to play," he added. "But once I got over the initial soreness of the shoulder, I've made some great strides this week."

On the women's side, second seed and three-time winner Venus Williams cruised to a 6-3, 6-1 victory over Japan's Shinobu Asagoe. The 22-year-old American came in second in another Grand Slam to younger sister Serena at the Australian Open, but she secured her 29th career title last month at Antwerp.

Fourth seed Justine Henin-Hardenne of Belgium played for the first time in exactly a month but extended her winning streak to five matches with a 6-3, 6-2 triumph over Russian qualifier Vera Douchevina. Henin-Hardenne won the Dubai Open in February but chose not play at Indian Wells.

Jennifer Capriati also was an early winner. The sixth-seeded American defeated Russia's Anastassia Rodionova, 7-6 (7-3), 6-2. Capriati started the season poorly as she was not yet fully recovered from offseason eye surgery. But she has been rounding into form, reaching the semifinals last month at Dubai and last week at Indian Wells.

"I think I came off a great week last week in Indian Wells and I feel like I'm getting back to the level where I was at before the beginning of the year," said the 26-year-old Floridian, a two-time finalist here.

NFL // 1 hour ago
Cowboys OL Ty Nsekhe ruled out Sunday due to heat-related illness
Sept. 17 (UPI) -- The Dallas Cowboys will be without tackle Ty Nsekhe, who was hospitalized due to a heat-related illness, when they play the Los Angeles Chargers on Sunday, coach Mike McCarthy told reporters Friday. 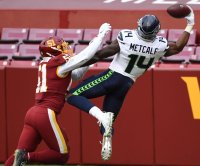