DARLINGTON, S.C., March 15 (UPI) -- Rain and cold weather continued to wreak havoc on the NASCAR circuit Saturday as the Busch Series DarlingtonRaceway.com 200 was postponed until Monday at 11 a.m. EST.

The field took the track for a few laps with the pace car ahead as rain started, forcing the cars to be covered on pit lane.

Rain also forced the cancellation of qualifying on Thursday for both the Busch and Truck series races. Winston Cup qualifying and the truck race were completed Friday.

Stanton Barrett again will start from the pole in the Busch race, thanks to the performance of owner Jack Roush, who captured the 2002 series title behind driver Greg Biffle. Biffle since has moved on to the Winston Cup series. Barrett is a Hollywood stuntman when not behind the wheel.

Driving a Ford Taurus, he is in his first year with Roush Racing. He started on the pole two weeks ago in Las Vegas and finished eighth.

Jason Keller is the defending champion of this race and will start next to Barrett on the front row, also in a Ford. But the next two rows consist of Chevrolet Monte Carlos.

David Green, who is second in the points standings behind Winston Cup regular Kevin Harvick, starts seventh in a Pontiac Grand Prix. Green and Brad Teague dropped to the rear of the field due to changing engines on their cars.

Some notable Winston Cup regulars are competing in the event.

Also, Chris Bingham and Morgan Shepherd were sent to the back of the grid for missing the driver's meetings. 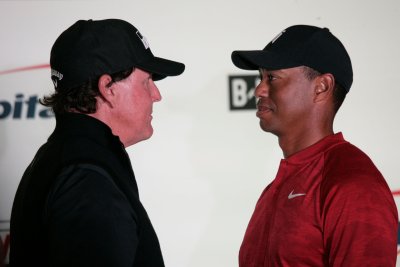