WASHINGTON, Nov. 9 (UPI) -- Jerry Stackhouse's dunk at the buzzer capped a frantic finish Friday night and gave the Washington Wizards a 100-99 victory over the Los Angeles Lakers, who have lost three straight games.

In control for most of the night, the Wizards squandered a 12-point lead in the final 5 1/2 minutes. Washington's Michael Jordan scored a season-high 25 points, but faltered in the clutch. He committed a silly foul and missed two free throws in the final 30 seconds.

After Jordan's free throw gave Washington a 98-96 lead with 11 seconds left, Los Angeles moved the ball from superstar Kobe Bryant to hot-shooting Brian Shaw to clutch performer Robert Horry, whose three-pointer from the left corner gave the Lakers the lead with 2.9 seconds to go.

On Washington's final possession, Jordan was a decoy as he drifted to the weak side of the court. Stackhouse inbounded to Bryon Russell, rubbed his man off a pick and took a return pass for a wide-open dunk that replays showed clearly beat the buzzer.

Stackhouse scored 29 points and helped the Wizards win consecutive games for the first time this season.

Belfour falls in return to Dallas

DALLAS, Nov. 9 (UPI) -- Pierre Turgeon and Jason Arnott accounted for the Dallas scoring Friday night as the Stars spoiled the return of goaltender Ed Belfour with a 2-1 victory over the Toronto Maple Leafs.

A member of the Stars' Stanley Cup winning team in 1998, Belfour played five seasons in Dallas before signing with Toronto as a free agent.

The Stars wasted little time in getting to their former teammate. Just 2:13 into the contest, defenseman Phillipe Boucher' shot deflected off teammate Jere Lehtinen and to Turgeon, who fired the puck into an empty net.

Arnott extended the lead to 2-0 at 3:52 of the second period when he took a back pass from Bill Guerin and wristed it past Belfour.

Marty Turco, who was kept by the Stars because he was younger and more inexpensive than Belfour, turned aside 22 shots. He has allowed just four goals in his last three starts.

Vince Carter out for a month

TORONTO, Nov. 9 (UPI) --The Toronto Raptors announced Friday that Vince Carter would have to miss at least the next four weeks with a strained left quadriceps tendon.

Sports physician Dr. James Andrews recommended against further surgery but advised that Carter sit out a month to let the tendon heal.

The injury forced the 6-6 Carter to miss 22 games last season. He played his final game on March 19 and underwent surgery on the tendon. However, the Raptors regrouped without their high-flying forward and won 12 of their last 14 games to make the playoffs.

The three-time All-Star said his knee felt fine at the start of the season and he averaged 18 points and 36 minutes in the first two games. However, in Toronto's third game last Saturday against Houston, Carter re-injured the knee in the first quarter. He missed Toronto's two most recent games, a win over Chicago and a loss to Dallas.

Unbeatens all on the road Saturday

KNOXVILLE, Tenn., Nov. 9 (UPI) -- All four of the remaining unbeaten teams in Division I-A play on the road Saturday and the most difficult of the assignments is the one facing the club ranked No. 1 in the coaches poll -- the Miami Hurricanes.

Miami (8-0) will play Tennessee in Neyland Stadium, one of the more intimidating venues in all of college football. Although the Hurricanes still are considered the best team in the country by the coaches, they have fallen to No. 3 in the BCS rankings -- which determine the two teams that will battle for the national championship in the Fiesta Bowl.

No. 16 Bowling Green (8-0), plays at Northern Illinois in a Mid-American Conference game.

The Texas Longhorns, who in the past two weeks have climbed from No. 10 to No. 4 in the BCS, will be hoping one or more of the teams in front of them stumble Saturday. Texas, after beating Iowa State, Kansas State and Nebraska on consecutive weekends, should have a relatively easy task when it hosts Baylor.

Miami Coach Larry Coker knows that his defending national champions may be living a little dangerously.

Miami trailed after three quarters at lowly Rutgers last week before exploding in the fourth quarter for a 42-17 victory. A similar effort could spell trouble.

"You can't live on the edge week in and week out, quarter by quarter, because if you make a key mistake you have no chance to win," said Coker, who is 20-0 as Miami coach.

Miami recorded the 500th win in school history last week and won for the 15th straight time on the road.

Tennessee (5-3) dropped out of the national championship sweepstakes a long time ago. But the Volunteers can have an impact on the title chase and salvage their season with a win Saturday.

The only previous meeting between the teams was Tennessee's 35-7 win in the Sugar Bowl following the 1985 season.

Newman scored his record-setting sixth pole of the season as he drove his Ford Taurus to a lap of 132.655 miles per hour at the one-mile Phoenix International Raceway.

The pole broke the previous rookie record of five set by the late Davey Allison in 1987.

Winston Cup points leader Tony Stewart, who has a 112-point advantage over Mark Martin, qualified 16th at 131.014 mph in a Pontiac Grand Prix.

Stewart can clinch the championship if he gains 73 points on Martin. If Stewart leaves with a 185-point lead on his nearest competitor, he wins the championship regardless of what happens next week at Homestead-Miami Speedway.

If Stewart gains at least 39 points on Martin, he only needs to start at Miami to clinch the title.

Zhitnik's knee-to-knee hit knocked out Hlavac, but failed to prevent Hlavac from setting up a goal in Buffalo's 2-0 loss Thursday night. Zhitnik received a kneeing major and a match penalty.

But Hlavac managed to slide a pass to Jeff O'Neill as he tumbled to the ice and O'Neill put a one-timer past rookie goaltender Mika Noronen with 2:37 left in the first period. Hlavac was helped off the ice and did not return.

Under the terms of the collective bargaining agreement and based on his average annual salary, Zhitnik will forfeit $39,074.

Zhitnik will miss games Saturday against Atlanta and Tuesday against Boston.

SOTOGRANDE, Spain, Nov. 9 (UPI) -- Angel Cabrera threatened to pull away during the second round of the Volvo Masters Friday, but he was tripped up by Valderrama's notorious 17th hole.

Cruising with a seven-stroke lead, Cabrera double-bogeyed the par-5 17th and settled for a four-stroke advantage at the midway point of the European Tour's season-ending tournament.

Cabrera finished the day with a 1-over 72 and was at 7-under-135 for the tournament after firing a 63 on Thursday.

Spain's Sergio Garcia, Colin Montgomerie of Scotland, Bradley Dredge of Wales and Robert Karlsson of Sweden were tied for second at 3-under.

Garcia shot a 70 on Friday, but missed a short birdie attempt on the last hole.

Wilson, inked a two-year contract. Financial terms were not disclosed.

On Thursday, the Mariners worked out a one-year contract with popular designated hitter Edgar Martinez, the so-called "Ancient Mariner," who made his major league debut with Seattle in 1987.

Wilson, 33, is the Mariners' all-time leader in games caught with 1,027 since being acquired in 1993 from Cincinnati. 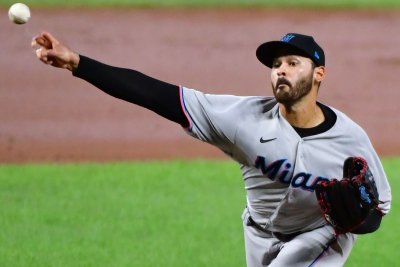