Hudson went 2-0 with a 0.55 ERA in two starts against West Dvision rivals Anaheim and Seattle, including a four-hit shutout over the Mariners. He has won seven straight decisions and allowed only 12 earned runs in his last nine starts.

Ramirez led the majors with five home runs and the AL with 11 RBI last week. In seven games, he went 12-for-27 (.444), scoring seven runs and hitting a home run in three straight Boston wins from Sept. 9-11, including a game-winning grand slam last Wednesday. Ramirez was also recognized for the award for the week ending April 21.

Other players considered for the award were Ramirez's teammate Cliff Floyd, who posted a .536 batting average and Toronto's Carlos Delgado who batted .476 with four home runs and eight RBI.

MLB // 2 hours ago
Reds fan accidentally catches baseball in beer cup, chugs for crowd
May 24 (UPI) -- A Cincinnati Reds fan attempted to catch a foul ball during the team's loss to the Chicago Cubs, but his beer did most of the work, as the souvenir landed in the cup placed directly in front of him. 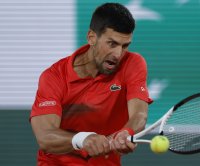 NBA // 22 hours ago
Heat's Tyler Herro out for Game 4 vs. Celtics
MIAMI, May 23 (UPI) -- The Miami Heat will be without guard Tyler Herro for Game 4 of the 2022 Eastern Conference finals, the team said Monday. Herro sustained a groin injury in Game 3.

Sports News // 22 hours ago
Justin Thomas lauds golf team for PGA Championship win, expects Pereira rebound
May 23 (UPI) -- Justin Thomas used all resources available for his historic rally at the 2022 PGA Championship, including his golf pro father, his un-retired caddie and motivation from friend Tiger Woods for what he called a "team win."
Advertisement