EAST RUTHERFORD, N.J., Jan. 6 (UPI) -- Brett Favre was the victim of a record-breaking sack by Michael Strahan late in the fourth quarter Sunday, but helped the Green Bay Packers lock up a home playoff game in a 34-25 victory over the New York Giants.

By the fourth quarter, the only thing hanging in the balance was whether Strahan would record a sack. He did with 2:42 left, when Favre rolled right and fell at Strahan's feet in an obvious gift.

The sack gave Strahan 22 1/2 - half a sack more than the record Mark Gastineau set with the New York Jets in 1984. But the mark was overshadowed by the Giants' inability to make the playoffs after reaching the Super Bowl last year.

"I couldn't have personally asked for a better season," said Strahan, who has 84 1/2 sacks in nine years. "Teamwise, I could ask for a lot better and that's the part that hurts."

Gastineau, who played at Giants Stadium as a member of the Jets, was in attendance, moving from a suite to the field in the fourth quarter.

"It's almost like if I had a torch right now, I would pass it on him, but mine went out a long time ago," said Gastineau, whose life after football has been marred by personal problems.

Although neither Strahan or Favre admitted to corroborating on the sack, they did have an exchange just before the play.

"Strahan can get sacks on his own, so we don't have to give them to him," Green Bay coach Mike Sherman said. "He's a good enough player that he can sack people."

Favre congratulated Strahan after the sack, then accepted praise as the Packers (12-4) clinched a homefield wild card playoff game with the San Francisco 49ers next week. They have never lost a postseason game at Lambeau Field (10-0).

"It's a significant opportunity for us to bring the 49ers to Lambeau Field as opposed to us going there," Sherman said.

The defending NFC champion Giants (7-9) finished the year with their eighth loss in 12 games.

Strahan wasn't the only Giant to set an NFL record. Quarterback Kerry Collins had his hand in another, albeit a dubious one. He fumbled three times to bring his season total to 22.

Tony Banks held the previous record with 21 fumbles for St. Louis in 1996.

Collins, who recovered two of his fumbles but threw two interceptions among 59 passes, also became the first quarterback in history to take every snap in two straight seasons.

Green Bay scored 20 straight points bridging the second and third quarters to turn a 14-10 lead into a 34-10 cushion 4:35 before the final period.

Favre capped the spurt with a 54-yard touchdown pass to Corey Bradford, three plays after Collins was stripped from behind by defensive end Billy Lyon and Vonnie Holiday recovered the fumble.

The sequence was telling of New York's day.

Holiday lost control of the ball when he was sandwiched by a pair of tacklers, but officials ruled him down by contact, preventing Fassel from challenging.

Nothing seemed to go right for the Giants. They were called for holding on the opening kickoff and Collins followed by fumbling the first snap of the game, although teammate Ron Dayne recovered.

In the second quarter, Morten Andersen hit a 50-yard field goal, but it came after New York was whistled for a false start. Owen Pochman, who handled kickofs, then missed a 55-yarder.

"Mistakes that we made, it is nobody's fault but ours," Collins said. "Opportunities missed are going to be the theme that carries us through the offseason."

Even a good day turned bad for one Giant. Amani Toomer became the first New York receiver since Homer Jones (1966-68) to post three straight 1,000-yard seasons. But he suffered a concussion.

The calls also went against the Giants. Cornerback Dave Thomas was flagged for a phantom pass interference call midway through the third quarter, leading to a tirade from Fassel and a 43-yard field goal by Longwell.

Longwell kicked a 44-yarder on the final play of the first half to give Green Bay a 17-10 lead. Dorsey Levens then returned the second-half kickoff 53 yards and Ahman Green capped a 31-yard drive with a one-yard run.

Longwell's second field goal of the day made it 27-10 and Favre's long touchdown pass to Bradford allowed Green Bay cruise to victory.

Favre completed 15 of 30 passes for 315 yards with two touchdowns and no interceptions. He finished the regular season with 3,921 passing yards and 32 touchdowns, tying him for second in the NFL.

Green rushed 23 times for 101 yards and two scores. He added two catches for 19 yards but fell 19 yards shy of becoming the first player in franchise history with 2,000 yards from scrimmage in one season.

NHL // 13 hours ago
New York Islanders postpone games after players test positive for COVID-19
Nov. 27 (UPI) -- An outbreak of COVID-19 on the New York Islanders has caused the hockey team to postpone its games through at least Tuesday, the National Hockey League announced Saturday. 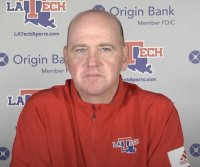 Soccer // 2 days ago
MLS Cup Playoffs: Timbers upset top-seeded Rapids
Nov. 26 (UPI) -- Defender Larrys Mabiala cleaned up a loose ball in the box with a shot into the upper corner for a 90th-minute score, leading the Portland Timbers to an upset of the top-seeded Colorado Rapids in the MLS Cup Playoffs.