GREEN BAY, Wis., Dec. 23 (UPI) -- With the snow flying at Lambeau Field, Brett Favre threw for three touchdowns Sunday to carry the Green Bay Packers into the playoffs with a 30-7 victory over the Cleveland Browns.

Favre extended his NFL record by reaching 30 touchdowns passes in a season for the sixth time. Dan Marino is second with four and no other player has three.

The Packers improved to 10-4 and wrapped up no worse than a wild card berth. Green Bay remained one game behind Chicago in the race for the NFC Central title. The Packers own the tiebreaker since they swept the Bears in the season series.

Green Bay also improved to 28-0 at home when the gametime temperature is 34 degrees or below. Steady snow flurries fell during the contest.

"It is a big deal and everyone was excited in the locker room," said Favre of clinching a playoff berth. "I don't want to sound like I'm not excited, but we have two games left. Just getting in the playoffs, to me, is just not enough. It's a start and, of course, we haven't been there in several years."

Favre connected with tight end Bubba Franks on scoring passes of one and four yards in the first quarter, staking the Packers to a 13-0 lead. He also lofted a 16-yard touchdown pass in the fourth quarter to running back Dorsey Levens, who made a diving catch in the end zone.

After completing 14 of 21 passes for 97 yards in the first half, Favre was just four of seven for 42 yards in the second half.

Needing a strong running game in the 24-degree weather with winds whipping at 15 miles per hour, the Packers again received big production from Ahman Green, who rushed for 150 yards on 21 carries, increasing his season total to 1,253 yards.

"I'm accustomed to it coming from Nebraska, growing up there and playing college football there," Green said. "I kind of know how not to make it an issue. If you worry about the cold and you're not feeling your toes and you're not feeling your hands, you put yourself out of the game. You get used to it. You might not ever like it, but you always know what you have to do mentally to be prepared for the game."

Cornerback Tyrone Williams scored on a 69-yard interception return with 43 seconds left in the second quarter, giving Green Bay a 23-7 halftime lead, and had another interception in the second half as the Packers forced five turnovers.

"It (his first interception) was at the end of the half and they didn't want to give up a touchdown at the end of a half like that," Williams said. "It put them back on their heels big time after they were making a push at us. It gave us back the momentum."

The Packers reached double figures in wins for the first time since they earned a wild card berth with an 11-5 record in 1998.

"We're certainly not satisfied just being in the playoffs," said Packers coach Mike Sherman. "We still want to win our division and try to keep pace with the Bears."

"We're in the tournament but now we just need to position ourselves as good as possible," said Packers defensive tackle Santana Dotson. "Hopefully try to get a bye and win a couple of games at home. That would be my Christmas wish."

Jamel White, who had a total of 240 yards on 73 carries in Cleveland's first 13 games, rushed for 108 yards on 13 carries in the first half and finished with 131. It was the first 100-yard game for the second-year back from the South Dakota. White also caught nine passes for 85 yards, including a three-yard touchdown.

"Jamel White had a good game," Browns coach Butch Davis said. "He is a good mudder, he has quick steps. The offensive line did a good job, particularly in the first half."

But Cleveland quarterback Tim Couch was intercepted three times, the most costly coming when the Browns were in Green Bay territory and he tried to throw across the field to his left.

Williams diagnosed the play, cut in front of White to pick off the pass and raced untouched for a 69-yard touchdown late in the first half.

"The weather was not a factor even though this was the first time I played in snow," said Couch, who was 22 of 33 for 203 yards. "I had a couple of bad passes."

NBA // 2 hours ago
NBA takes draft picks from Miami Heat, Chicago Bulls
Dec. 1 (UPI) -- The Miami Heat and Chicago Bulls each will forfeit their next available second-round picks in the NBA Draft because the violated league free agency rules, the NBA announced Wednesday.

NBA // 9 hours ago
Deandre Ayton leads Suns over Warriors for 17th straight win
Dec. 1 (UPI) -- Deandre Ayton totaled a game-high 24 points and 11 rebounds to lead the Phoenix Suns to a win over the Golden State Warriors and extend the team's franchise-record win streak to 17 consecutive games. 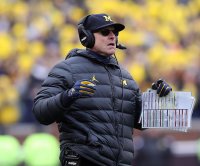