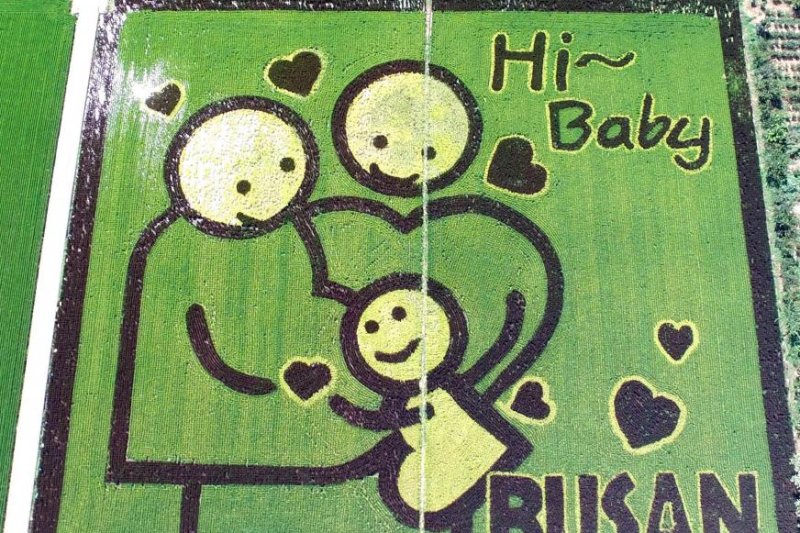 This picture drawn on a rice paddy in the southeastern port city of Busan on August 13, encourages childbirth. Photo by Yonhap

SEOUL, Aug. 22 (UPI) -- South Korea's fertility rate dropped to a record low of 1.05 last year, falling below its previous low of 1.17, which ranked the lowest among developed countries in 2016, according to government data.

A total of 357,800 babies were born last year, a 12 percent drop from 2016. The total fertility rate in the second quarter of this year was 0.97, according to Statistics Korea on Wednesday.

If the fertility rate remains at 1.05, South Korea is expected to see its first population decline by 2027, according to a statistics official in a Chosun Ilbo report.

Birth rates declined for women under 40, especially those in the late 20s and early 30s. Birth rates rose for women older than 40.

The low birth rates attribute to delays in marriage and childbearing among women. But the state statistics agency also found that the number of women in the 30-34 age group dropped to some 1.5 million from more than 2 million a decade ago.

The average age for first-time mothers was 31 and the mean age for having children was slightly higher in major cities, such as Seoul and Busan, with 33.

World News // 17 hours ago
EU moves to require universal charger for all mobile devices
Oct. 4 (UPI) -- The European Parliament has approved a new regulation that would require all mobile devices, cameras and tablets sold in the European Union to have USB Type-C charging ports by the end of 2024.

World News // 17 hours ago
Germany's move away from coal comes with a twist
Oct. 4 (UPI) -- German energy company RWE is phasing out coal early, but it will keep some plants with a heavy environmental footprint up and running.

World News // 18 hours ago
10 killed in avalanche in India
Oct. 4 (UPI) -- A massive avalanche killed at least 10 people and left many others stranded in India on Tuesday.