WASHINGTON, Dec. 5 (UPI) -- The U.S. Federal Trade Commission says the developer of a flashlight app for Android phones has settled over charges of deceiving users about data collection.

The FTC said Thursday it has settled with app company Goldenshores Technologies over charges it had deceived consumers about how their geolocation information would be shared with ad networks and other third parties, Broadcasting & Cable reported.

The app's privacy policy did not disclose that it transmitted locations and device identifiers to ad networks, the FTC said.

"When consumers are given a real, informed choice, they can decide for themselves whether the benefit of a service is worth the information they must share to use it," Jessica Rich, director of the FTC Bureau of Consumer Protection, said in a statement. "But this flashlight app left them in the dark about how their information was going to be used."

While the FCC cannot require privacy policies, if those policies do not provide accurate info, the FTC can pursue them under its false and deceptive ad authority.

When an app is opened that collects geolocation information, it must plainly state it is doing so and allow for opting out, the FTC said.

Goldenshores Technologies, while not fined, must inform users of its information collection policy and must delete any personal info already collected by the app, which has been downloaded tens of millions of times, the FTC said. 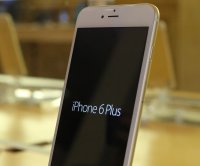