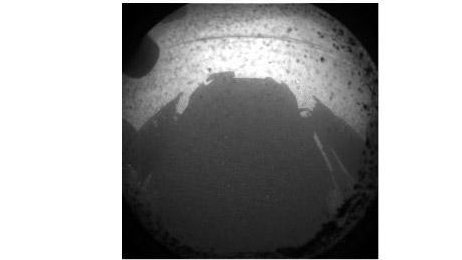 This is one of the first images taken by NASA's Curiosity rover, which landed on Mars the evening of Aug. 5 PDT (morning of Aug. 6 EDT). It was taken through a "fisheye" wide-angle lens on one of the rover's front Hazard-Avoidance cameras at one-quarter of full resolution. The camera is the left eye of a stereo pair positioned at the middle of the rover's front side. The clear dust cover on the camera is still on in this view, and dust can be seen around its edge, along with three cover fasteners. The rover's shadow is visible in the foreground. As planned, the rover's early engineering images are lower resolution. Larger color images are expected later in the week when the rover's mast, carrying high-resolution cameras, is deployed. (NASA/JPL-Caltech)

PASADENA, Calif., Aug. 6 (UPI) -- The Curiosity rover, the biggest and most advanced spacecraft ever sent to another planet, landed safely on Mars early Monday, the U.S. space agency NASA said.

The nuclear-powered, car-size automated motor vehicle -- part of NASA's unmanned Mars Science Laboratory mission -- touched down about 1:31 a.m. EDT and almost immediately began transmitting photographs showing its own wheels safely on the surface of an ancient geological feature known as Gale Crater near the Mars equator and 154 million miles from Earth.

Curiosity carries the most advanced payload of scientific gear ever used on the surface of the Red Planet and is expected to revolutionize the understanding of the planet, gathering evidence Mars is or was capable of fostering life, if only in microbial form.

"Tonight, on the planet Mars, the United States of America made history," President Obama said Sunday in a statement. "The successful landing of Curiosity -- the most sophisticated roving laboratory ever to land on another planet -- marks an unprecedented feat of technology that will stand as a point of national pride far into the future."

The landing proved "that even the longest of odds are no match for our unique blend of ingenuity and determination," Obama said.

Besides trying to determine if Mars could ever have supported life, the $2.5 billion mission is to study its climate and geology, and plan for a human mission to the planet.

Obama has established a goal of sending astronauts to Mars in the 2030s, and NASA Associate Administrator John Grunsfeld said Sunday humans might one day live there, too.

RELATED Mars landing to go live in the Big Apple

The spacecraft is expected to pave the way for important leaps in deep-space exploration, including bringing Martian rock or soil back to Earth for detailed analysis.

Technology // 7 years ago
Google to offer Mac-friendly version of Chrome
PALO ALTO, Calif., June 14 (UPI) -- Google's beloved Internet browser is about to get a Mac-friendly makeover, addressing a number of concerns raised by Apple users over the years.