System could block phone use while driving 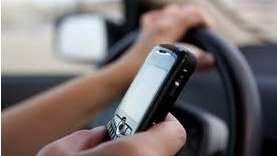 TAMILNADU, India, July 5 (UPI) -- Researchers in India say a new technology could prevent truck or bus drivers and others on the road from using their cell phones while driving.

Based on RFID, or radio-frequency identification, technology, the system can determine whether a driver is using a cell phone while the vehicle is in motion and "jam" or block the phone signals, researchers at the Anna University of Technology in Tamilnadu reported Thursday.

The low-range mobile jammer could block the driver from using a phone while ensuring vehicles passengers might use their phones unhindered, they said.

Globally, around a fifth of fatal road accidents with trucks and other heavy vehicles involved drivers using a cell phone at the time of the accident, the researchers reported.

"Dialing and holding a phone while steering can be an immediate physical hazard, but the actual conversations also distract a driver's attention," Abdul Shabeer and colleagues said in their study published in the International Journal of Enterprise Network Management.

In addition to blocking cellphone use, the system has the potential to report "infringements" depending on local laws and might also report vehicle registration number to the traffic police under such laws, the researchers said.