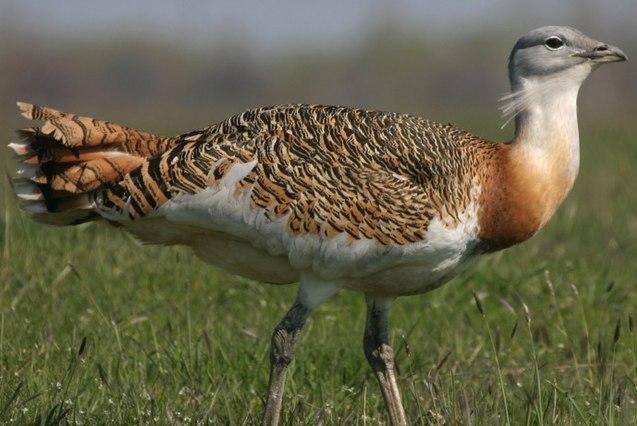 The great bustard, the heaviest bird capable of flight, may be self-medicating by eating plants, a study published Wednesday in Frontiers in Ecology and Evolution suggests. Photo by Andrej Chudy/Wikimedia Commons

Nov. 23 (UPI) -- The great bustard actively seeks out medicinal plants that can kill pathogens, according to a study published Wednesday in Frontiers in Ecology and Evolution.

The study published in the journal Frontiers suggests the large bird could be a rare example of birds that use plants to self-medicate.

"We show here that plants in the diet of bustards are also active against laboratory models of pathogens. We present the anti-parasitic results for two plant species as an example. Although the toxicity of P. rhoeas and E. plantagineum differs, great bustards show a marked preference for both plants during the mating season," the study said.

RELATED Great Bustards to be released in Britain

Results of the study also supported the view that male bustards consumed two plants because the "exertion of courtship put them under immunological stress."

According to Bautista-Sopelana, great bustards eat corn poppies and purple viper's bugloss during the mating season in April when energy expenditure of the birds is the greatest.

Male great bustards' immune systems are weakened during the mating season because of their investment in secondary sexual characters and sexual display, according to the study.

RELATED Rare bird to be re-introduced into U.K.

"Since April is the month when males reach the peak of display activity and most mating events occur," the study said. "We hypothesize that consumption of these two plants could help them reduce the negative effects of parasites during this important phase of their reproductive cycle."

Humans self-medicate and it is suspected in animals, but difficult to conclusively prove.

Researchers on this study say more research is needed to confirm that great bustards do in fact self-medicate by eating plants.

Science News // 3 days ago
NASA temporarily loses communication with Orion spacecraft
Nov. 23 (UPI) -- Communication between NASA's Mission Control Center in Houston and the Artemis I moon mission spacecraft was lost for 47 minutes Wednesday morning. A ground side reconfiguration resolved it, according to NASA.

Science News // 4 days ago
Europe's space agency reviewing space-based solar power
Nov. 22 (UPI) -- Solar power could be easier to harness from space, though the technology needed to beam it back to Earth is still in the developmental stage.

Artemis I captures new images of Earth, the moon and Orion spacecraft

Ancient statues uncovered in Italy could rewrite part of history