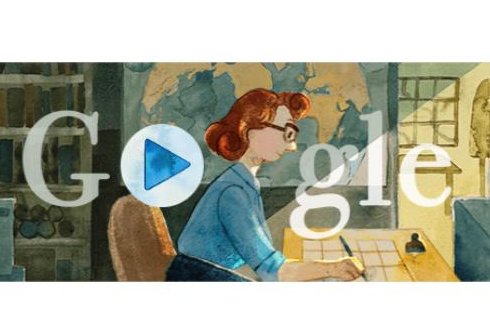 Google is celebrating scientist Marie Tharp with a Doodle. Screenshot from Google Doodle

Michigan-born Marie Tharp earned the distinction of being the first woman to map the ocean floor in her work with the Lamont Geological Observatory in New York.

After earning her master's degree in petroleum geology from the University of Michigan, Tharp moved to New York In 1948, becoming one of the few female scientists in the field at the observatory, she and geologist Bruce Heezen worked together to map the ocean floor. But, when Tharp brought Heezen her discovery of the Mid-Atlantic ridge and continental drift, he dismissed them. Tharp was ordered to erase and completely redo her calculations.

When she uncovered the same findings, backed up by other scientific discoveries, Heezen was forced to accept them as facts. They two mapped the ocean floor and twenty years after their discovery the map was published in National Geographic as "The World Ocean Floor."

"I had a blank canvas to fill with extraordinary possibilities, a fascinating jigsaw puzzle to piece together," Tharp said. "It was a once-in-a-lifetime, a once-in-the-history-of-the-world opportunity for anyone but especially women in the 1940s."

The interactive Google Doodle tells Tharp's story via audio and animation. The three women who perform the voiceover, Caitlyn Larsen, Rebecca Nesel, and Dr. Tiara Moore, are all scientists who say they were inspired by Tharp's life and work.

"Marie's story inspires me because she was a woman in earth science when that was very uncommon and dealt with many challenges because of that, like not being allowed on the research vessels or having her work dismissed by her own colleagues," Nesel told Google. "Regardless, she remained confident in her work and her abilities, and didn't let those challenges dim her creativity and passion toward her work."

Science News // 1 day ago
Mars, meteors: December's must-see astronomy events
December features the longest nights of the year, and the final month of 2022 will be packed with astronomical happenings ranging from the most active annual meteor shower to the best views of Mars since 2020.

Science News // 2 days ago
NASA awards contract for 3D-printed construction on moon, Mars
Nov. 29 (UPI) -- Texas-based startup ICON has landed a five-year, $57 million contract from NASA to 3D-print landing pads, roads and shelter on the moon and on Mars.