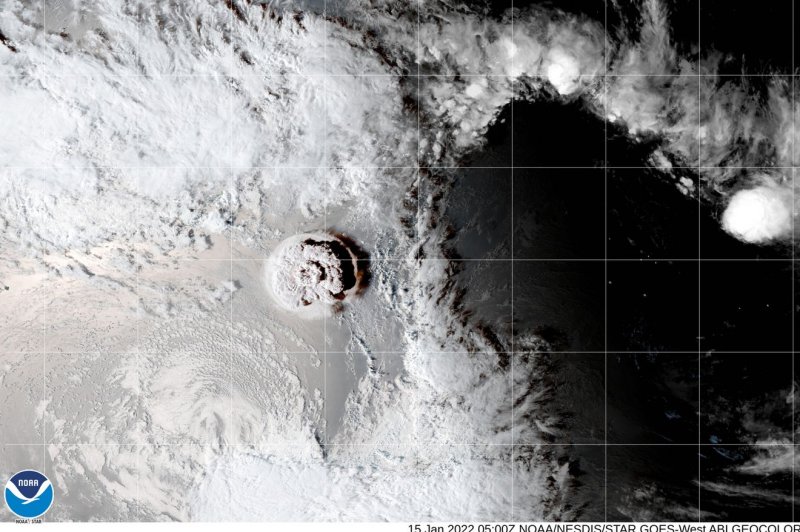 Aug. 3 (UPI) -- Researchers said the eruption of the underwater volcano in Tonga sent enough vaporized water into the air to fill more than 58,000 Olympic-size swimming pools and could be enough alone to temporarily affect Earth's global average temperature.

Findings from a study on the Hunga Tonga-Hunga Ha'apai volcano eruption on Jan. 15 was published in Geophysical Research Letters recently. The explosion produced a tsunami that reached portions of the United States and released a sonic boom that traveled around the globe twice.

The explosion was detected by NASA's Microwave Limb Sounder on the space agency's Aura satellite which measures atmospheric gases, including water vapor and ozone.

"We estimate that the excess water vapor is equivalent to around 10% of the amount of water vapor typically residing in the stratosphere," the researchers, led by Luis Millán, an atmospheric scientist at NASA's Jet Propulsion Laboratory in Southern California, wrote in the study.

"Unlike previous strong eruptions, this event may not cool the surface, but rather it could potentially warm the surface due to the excess water vapor," they said.

Millán said the energy produced by the underwater volcano surprised many researchers.

"We've never seen anything like it," Millan said in a press release from the Jet Propulsion Laboratory. "We had to carefully inspect all the measurements in the plume to make sure they were trustworthy."

NASA said volcanic eruptions rarely eject such massive amounts of water into the stratosphere. The agency said in the past 18 years, only two other volcanoes -- the Kasatochi volcano in Alaska in 2008 and the Calbuco eruption in Chile in 2015 -- have elevated a large amount of water into the atmosphere.

"But those were mere blips compared to the Tonga event, and the water vapor from both previous eruptions dissipated quickly," NASA said in the press release. "The excess water vapor injected by the Tonga volcano, on the other hand, could remain in the stratosphere for several years."

The eruption severed an Internet cable that cut Internet service to Tonga for weeks, in addition to sending a 4-foot tsunami to the island and concerns along the west coasts of the United States and Canada.