A satellite view of the water levels in Lake Mead in Nevada on July 3, 2022. Photo courtesy of NASA Earth Observatory

July 21 (UPI) -- NASA on Thursday released new satellite images depicting the dramatic changes in the water levels of Lake Mead over the past two decades.

The photos show just how much water the Nevada lake has lost through repeated drought cycles from 2000 until July 3, 2022.

The images show entire sections of the lake completely dried up, with faint "bathtub rings" visible in the surrounding land where the water used to be.

Lake Mead, a man-made reservoir first filled in 1937, is filled by the Colorado River. The lake provides drinking water and irrigation for millions of people in much of the western United States.

The stark contrast in the images highlights more than two decades of extreme drought and higher temperatures in the region, a result of climate change.

According to NASA, 74% of nine Western states are under drought conditions, including Colorado, where the headwaters of the Colorado River are located. A below-average snowpack in many locations has also worsened drought conditions. 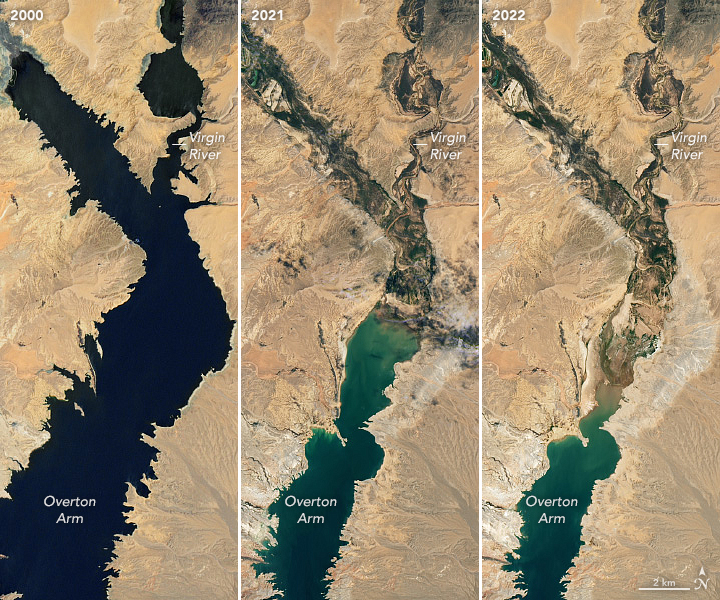 Science News // 24 minutes ago
Thursday night will be best chance to see Mars in 2022
Mars will reach opposition on Thursday night, making it one of the best nights of 2022 to see the planet glow in the sky.

Science News // 17 hours ago
Oldest DNA shows Greenland once was home to forested ecosystem
Dec. 7 (UPI) -- DNA sequences dating back 2 million years, the oldest ever obtained, suggest that the northeastern tip of Greenland was once home to a forested ecosystem unlike any now found on Earth.

Science News // 19 hours ago
Australian researchers find 100 million-year-old fossil in Queensland
Dec. 7 (UPI) -- Australian paleontologists said on Wednesday they have discovered the complete skeleton of an ancient large, long-necked marine reptile in the Queensland desert that is about 100 million years old.

Science News // 23 hours ago
Mars to disappear behind final full moon of 2022
A cosmic vanishing act is about to unfold in the night sky as the full moon passes directly between the Earth and one of its planetary neighbors  Wednesday night.

Science News // 1 day ago
Archaeologist claims human relative used controlled fire for light, cooking
Dec. 6 (UPI) -- South African archaeologists say they have proof that a close relative of humans used fire for both light and cooking meat, despite having a much smaller brain than ours.

Science News // 2 days ago
Artemis I's Orion flies close to moon ahead of return to Earth
Dec. 5 (UPI) -- NASA's Orion spacecraft has completed a close flyby of the moon on Day 20 of the Artemis I mission as the capsule prepares to return to Earth.

Science News // 2 days ago
Body of last Tasmanian tiger found in museum cupboard
Dec. 5 (UPI) -- Researchers in Australia have located the preserved remains of the last-known Tasmanian tiger, after they were misplaced for decades.
Advertisement

Oldest DNA shows Greenland once was home to forested ecosystem