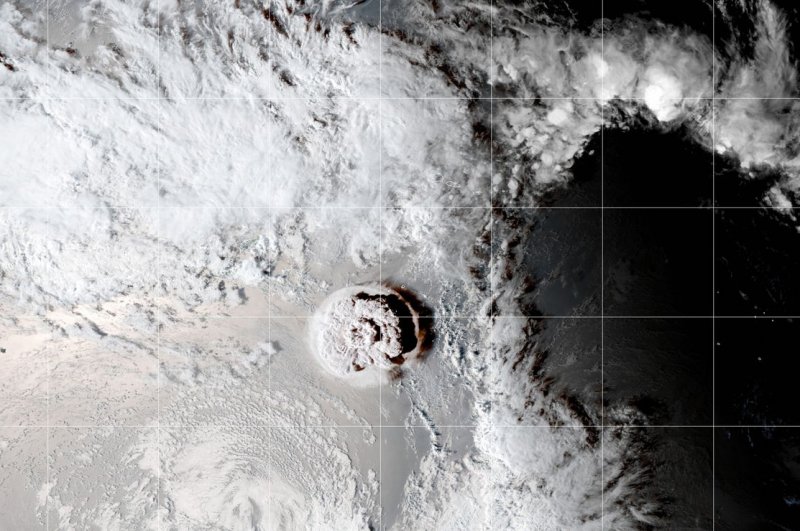 The eruption of Tonga's Hunga Tonga-Hunga Ha'apai underwater volcano on January 15, which produced a massive plume of smoke, is captured in this image provided by NOAA's GOES-West satellite. File Photo courtesy of NOAA | License Photo

May 10 (UPI) -- An explosive volcano that erupted near the Pacific island nation of Tonga in January sent hurricane-force winds and electric currents into the edge of space, according to an analysis of NASA data released Tuesday.

The Hunga Tonga-Hunga Ha'apai volcano erupted Jan. 15, sending a large plume of ash some 26 miles into the atmosphere and creating a shockwave that traveled about 1,000 feet per second and a tsunami that struck Nuku'alofa, Tonga, and American Samoa. The eruption killed at least six people.

The blast also caused atmospheric impacts, reaching into the ionosphere across the globe, according to a paper published in the journal Geophysical Research Letters.

The researchers said NASA data showed the volcano sent strong winds into thinner atmospheric layers, where they moved faster -- up to 450 mph -- until reaching the ionosphere and the edge of space.

"It's very surprising to see the electrojet be greatly reversed by something that happened on Earth's surface," said Joanne Wu, a physicist at University of California, Berkeley, and co-author on the new study. "This is something we've only previously seen with strong geomagnetic storms, which are a form of weather in space caused by particles and radiation from the sun."

NASA said the new research informs scientists' understanding of how events on Earth impact the upper atmosphere and the edge of space. A strong equatorial electrojet, for example, can disrupt GPS and radio signals in the region.

The International Space Station is pictured from the SpaceX Crew Dragon Endeavour during a flyaround of the orbiting lab that took place following its undocking from the Harmony module’s space-facing port on November 8. Photo courtesy of NASA
RELATED NASA's Crew-3 astronauts splash down in Gulf of Mexico

Science News // 3 days ago
Bipartisan group defends sequoia tree bill in California despite opposition
June 23 (UPI) -- A bipartisan trio of lawmakers defended the "Save Our Sequoias Act" on Thursday despite more than 80 environmental groups signing a letter to Congress opposing the act earlier this month.

Science News // 4 days ago
Megalodons were at very top of food chain, possibly cannibalistic, study says
June 22 (UPI) -- Megalodons, believed to be the largest species of shark that ever lived, were big enough to eat just about any animal they wanted -- and were possibly cannibalistic -- scientists say in a study published Wednesday.

Science News // 6 days ago
Chinese official says its Mars sample mission will beat NASA back to Earth
June 21 (UPI) -- A senior Chinese space official said on Monday the country is on track to bring back rocks from the surface of Mars two years ahead of the planned joint effort by NASA and the European Space Agency to do the same thing.

Science News // 1 week ago
Polar bears in Greenland adapted to hunt from glacial ice, study shows
June 17 (UPI) -- Scientists have discovered that a specific population of polar bears on Greenland have adapted to hunting from ice that has broken away from glaciers as global warming diminishes their natural hunting grounds on sea ice.
Advertisement