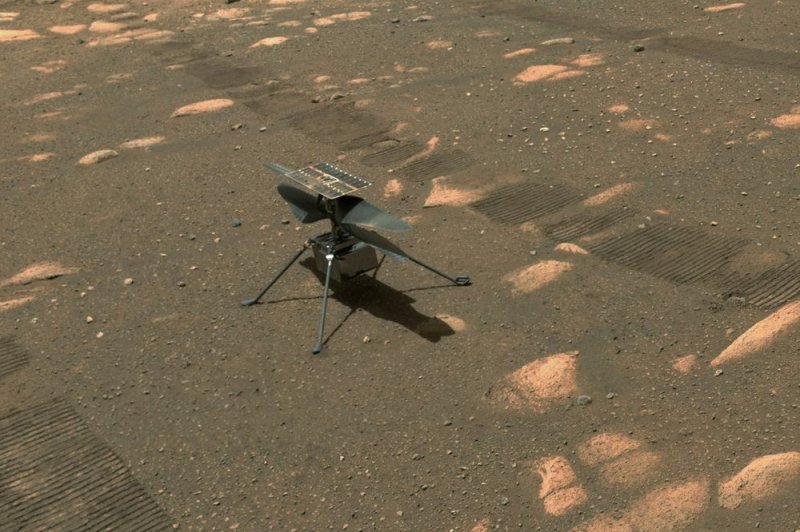 ORLANDO, Fla., Jan. 20 (UPI) -- One of the Red Planet's famous dust storms has kept the Mars helicopter Ingenuity grounded for two weeks, but the aircraft is scheduled for its 19th flight as early as Sunday, according to NASA.

Around the first of the year, NASA planned Flight 19 of the tiny, 4-pound helicopter on Jan. 5. But weather forecasters on Ingenuity's team in California noticed signs of the approaching dust storm, they wrote in a blog post.

Ingenuity is holding up much better than anyone expected, Ingenuity's team lead Teddy Tzanetos told UPI in an email.

NASA designed the aerial drone to demonstrate powered, controlled flight on another planet for the first time in a 30-day mission. But Ingenuity has been functioning nominally for over nine months.

When 2021 started, I was flying through space at over 50,000 mph/80,000 kph. One (Earth) year later, my land speed is definitely slower - but my pace of discoveries is only picking up. So much more to come: https://t.co/pT3fCGkL1i pic.twitter.com/nYn0w3DY3C— NASA's Perseverance Mars Rover (@NASAPersevere) December 29, 2021

"We do not see significant signs of wear to any components. However ... the Mars helicopter has numerous off-the-shelf parts that were not designed for space exploration. So while all systems are currently operating nominally, an unexpected issue is always a possibility," Tzanetos said.

"A strong regional dust storm appeared on the first day of the new year, encompassing Jezero crater just as we scheduled Flight 19," weather team members Jonathan Baptst and Michael Mischna wrote in the Wednesday night blog post. "We have never seen a storm of this strength so early in the Mars year before."

Instruments on the nearby Perseverance rover and on the Mars Reconnaissance Orbiter that circles Mars indicated the storm could arrive just as Flight 19 took off.

Dust storms have two negative impacts on Ingenuity, according to Bapst and Mishna.

First, they obscure sunlight needed for the aircraft's solar panels. Secondly, suspended dust particles are heated by sunlight which makes the air less dense -- a problem for the helicopter's rotors.

The dust storm resulted in an 18% drop in the amount of power flowing to Ingenuity's batteries from its solar panels, and air density dropped below safe thresholds, the weather team said.

Ingenuity has been scouting possible routes and destinations for Perseverance as the rover hunts for possible signs of ancient life on Mars.

Ingenuity is due to fly about 207 feet on Flight 19, heading north back toward its original landing field where it first flew in April. The flight is meant to prepare for it to scout further northern pathways for Perseverance, ahead of an approach to an ancient river delta that is still 1.5 miles away.

During Flight 19, Ingenuity will fly only about 33 feet above the surface, but it also will climb the side of a low plateau about 10 feet higher than its current position, Tzanetos said.

The current position, where Ingenuity landed after Flight 18, is a featureless expanse of flat sand, according to NASA's description.

That could cause problems if the helicopter isn't able to use cameras to determine its altitude and direction, Tzanetos said. Therefore, safety parameters will be adjusted to avoid a flight abort upon takeoff, he said.

The effort to keep Ingenuity flying and scouting for Perseverance has seen some turnover among its team of experts, Tzanetos said.

"Ingenuity has continued well beyond anyone's expectations. As a result there has been some staff turnover as some personnel have moved onto other projects and others have joined," he said. "In general, the team has grown since the summer to support a more consistent operations cadence."