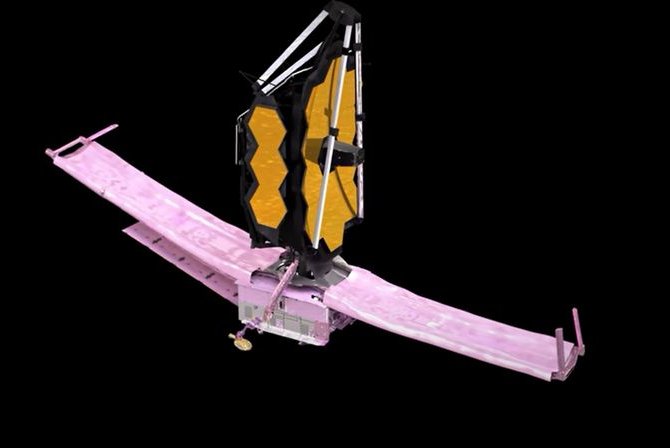 An illustration depicts James Webb Space Telescope after the main dish, still folded, is extended from the spacecraft base below. Image courtesy of NASA

Dec. 29 (UPI) -- The James Webb Space Telescope continued to deploy perfectly Wednesday as it flew over 360,000 miles from Earth on a million-mile-plus journey to its destination.

The latest maneuver for the $10 billion observatory was to extend its Deployable Tower Assembly, which hoists the giant gold reflective mirror a little farther from the thruster and heat shield.

The tower extension occurred as the forward and rear sun shield halves were deployed on Tuesday.

The tower extension makes the dish about 5 feet more distant from the spacecraft, Massimo Stiavelli, an astronomer and mission head for the Webb project, said in an interview Wednesday.

"When we launch, everything is as compact as we can make it, but then later on ... you separate the mirror and instruments away from the warm spacecraft," Stiavelli said.

⬆️ Heads up! At ~9am ET we began to extend #NASAWebb's Deployable Tower Assembly, which creates space between the spacecraft & telescope, helping to keep the telescope cold & giving the sunshield room to deploy. This could take 6+ hours. https://t.co/h3q2S1MvtW #UnfoldTheUniverse pic.twitter.com/huGb7VO6nG— NASA Webb Telescope (@NASAWebb) December 29, 2021

It's all part of the sophisticated technology that will make Webb the largest and most powerful telescope in history.

The telescope will use super-cooled infrared instruments to observe exoplanets, black holes, and galaxies that formed 13.5 billion years ago, the earliest ever seen.

But those instruments must be so cold -- minus-370 degrees F -- that sunlight or even Webb's own thrusters could cause interference. So the sun shield will wall off the instruments from those heat sources.

Everything during the launch and deployment has functioned perfectly so far, said Stiavelli, who works in the control room at the Maryland-based non-profit Space Telescope Science Institute, which operates Webb and the Hubble Space Telescope.

"Whenever one of these things happens... people are excited and you see the occasional fist bump, some cheering," he said.

But Webb is just five days into a 29-day deployment process in which the telescope will unfold and unfurl at a glacial pace to ensure success.

The next deployment step will remove covers over the folded sun shield halves, so it can be fully extended to its tennis court size.

In the meantime, NASA has confirmed that Saturday's launch of the telescope was so precise that Webb will have plenty of its own fuel to operate for more than the maximum lifespan of 10 years.

"Such an extension is something that particularly the astronomers like myself were very happy to see, because it means we can continue doing ground-breaking science for many years," he said.

Science News // 22 hours ago
Supermoon may outshine Perseid meteor shower
The summer of the supermoon is about to put on its final performance, stealing the spotlight from what is typically one of the most anticipated astronomical light shows of the year.

Science News // 1 day ago
Seaweed, giraffes, parrots other critical species becoming endangered, study says
Aug. 8 (UPI) -- Seaweed, which has survived on Earth in some form for 1.6 billion years, has made the list of threatened species, along with giraffes, parrots and oak trees, according to a United Nations report.

Science News // 5 days ago
SpaceX launches Falcon 9 in Florida space coast's second launch of the day
Aug. 4 (UPI) -- Florida's Space Coast on Thursday was busier than it's been in decades, launching two separate rockets on the same day for the first time since the heyday of the Space Race.