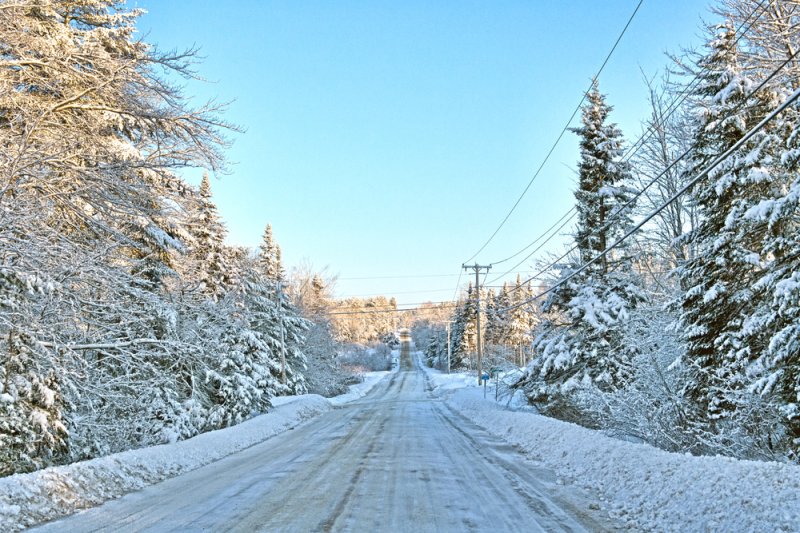 This year, ISO-NE warns, disruptions to the natural gas supply chain around the world could imperil Maine's grid should a prolonged cold spell strike.

Gordon Van Welie, CEO of ISO-NE, suggests that a visit from the polar vortex, a slow-moving mass of frigid Arctic air, could necessitate rolling blackouts or controlled outages.

These worries are present in many parts of the country, including California and Texas, which have experienced power disruptions due to extreme weather events in recent years. And even in Maine, the risk of an energy crisis lurks despite heavy winter snows and frigid temperatures being the norm.

RELATED La Nina expected to be weaker this winter, but parts of U.S. face Arctic cold

To head off potential crises, energy officials have called for a more resilient fuel supply and the expansion of New England's fuel and transmission infrastructure.

But some critics claim the grid -- and its vulnerabilities -- would best be served by public control and decentralization.

Van Welie said the problem is primarily one of supply and demand.

Most of the year, there's plenty of gas for electricity generators, but during the winter, homeowners and businesses -- and their heating systems -- get first dibs on gas in the region's pipelines.

"If your primary fuel source is gas, and if you don't have a firm supply of gas, you're going to have a problem," Van Welie told UPI.

"There's no question that we need additional transmission capacity, it's just a matter of how it's done," Berry told UPI.

For several years, Berry has led the push for a forced buyout of Maine's two largest electricity providers, Central Maine Power and Versant Power, and the creation of a consumer-owned utility.

Earlier this year, Maine's legislature passed a bill to do just that, but Gov. Janet Mills vetoed it.

To address the capacity problems facing Maine's grids, Berry and many of his allies in the fight for a consumer-owned utility want to see not just large-scale infrastructure upgrades, but also small-scale, decentralized solutions.

Advocates suggest that a consumer-owned, decentralized grid is a more resilient grid.

"A decentralized grid can feature more microgrids," Berry said. "If the school or hospital in your area is able to power up or stay powered during an extreme weather event, the whole community benefits."

"Having microgrids in all communities, accessible to all, is an important piece of our preparedness for extreme weather," Berry said.

Microgrids can help link a variety of distributed resources throughout a community. They are typically connected to the broader grid, but can operate as a closed loop in the event of a blackout.

John Farrell, co-director of the Institute for Local Self-Reliance and director of the Energy Democracy Initiative, agreed that consumer-owned utilities are more resilient.

One of the reasons that's the case, according to Farrell, is that consumer-owned utilities tend to have higher maintenance budgets.

Because privately held utilities are expected to return a profit to investors or shareholders, there's a financial incentive to defer maintenance and upgrades, whether it's trimming trees, installing taller poles or deploying stronger power lines.

Van Welie acknowledged that utilities aren't always incentivized to invest in preparation for low-probability weather events, but questioned whether microgrids and distributed resources would be able to turn lights back on for more than a few hours in the midst of a cold spell or major winter storm.

Berry and Farrell said they aren't calling for microgrids to replace large-scale transmission.

"The future that we need to move toward is one in which consumers are also producers," Berry said. "That's a seismic shift in thinking about how the grid in the future needs to look -- having more generation and storage located on site, whether it's in your home or business."

Even if distributed resources can't keep the TV on, they could safeguard necessities in an emergency.

"Local solar can be especially critical during storm recovery," Farrell said. "It can provide enough to charge cell phones or maybe run the furnace fan and power a refrigerator."

Disasters and the new normal

Last winter, Texas' power system -- which is both isolated from neighboring grids and heavily privatized -- experienced prolonged blackouts as a result of increased demand and constrained supply during a polar vortex, which brought snow, ice and freezing temperatures to a state unprepared for such weather.

"To avoid what happened in Texas, there needs to be a recognition that more severe and unusual weather will be the norm in the future," Berry said. "So we need to anticipate bizarre and extreme weather and be ready for it. Building more fortified infrastructure is important."

In California, the threat of wildfires has forced utilities to periodically shut off large sections of the state's electric grid, leaving many communities in the dark for days at a time. As a result, the demand for distributed power resources in the Golden State has been growing.

Diesel generators have traditionally been the failsafe solution for blackouts, but while cheaper upfront, they don't offer long term benefits. More sustainable solutions like solar panels and batteries can offset energy costs even when there's not an emergency.

Consumer-owned or publicly-owned utilities aren't new. In Maine, 97 towns are served by nine small consumer-owned power grids, and around the country, thousands of municipalities rely on publicly-owed power.

According to a report by Concentric Energy Advisors that was commissioned by Central Maine Power, there have been 63 attempted conversions of local utilities over the last 20 years, only 10 of which were successful.

Though publicly-owned utilities can be found across the country, there is little precedent for a forced takeover of a privately-held utility at the scale proposed by Berry and company.

With more than 1 million customers, Long Island Power Authority in New York is one of the country's largest publicly-owned utilities in the country. It was formed in 1986 by the New York Legislature after an ill-fated nuclear power plant buildout bankrupted the local power company.

While state and local governments set rules for developing and deploying microgrids, battery storage and community solar arrays, utilities often have discretion over how these rules and regulations are implemented.

When utilities are uncooperative, it takes longer and costs more to get distributed power projects off the ground.

"Utilities make money by building new power lines and upgrading substations," Farrell said. "All the distributed energy projects and things that might be offset or make those upgrades less necessary threaten the utilities' revenue."

Earlier this year, after solar industry leaders complained that Central Maine Power was sabotaging renewable projects by slow-walking interconnection studies, reviews required by ISO-NE and calling on Maine's Public Utilities Commission to investigate, Maine's largest utility acknowledged that it had "failed to meet its obligations."

"A very important obstacle to the interconnection of new energy resources is that the utilities hold too many of the cards, and they don't show their cards very often," Berry said. "We need more open data for better grid planning and architecture."

Other impediments exist, too -- such as money. It's going to cost a lot to make the energy grid more resilient and less reliant on fossil fuels.

"We are only at the beginning of this decarbonization journey, and it's going to take a massive amount of capital to make it happen," Van Welie said. "You've got to have a plan for raising those capital investments."

Central Maine Power and Versant Power have said consumer control of Maine's grid would leave ratepayers and taxpayers on the hook for billions of dollars.

But advocates claim that without the need to pay out shareholders, consumer-owned utilities can borrow the money needed for enhancements to boost resiliency and sustainability at much cheaper rates.

"If we can get a double benefit from distributed energy development, making decarbonization more affordable and building in resiliency, that's really cool," Farrell said.

Science News // 6 days ago
Milky Way to set backdrop for summertime comet, meteor showers
July offers a slate of astronomical sights for young stargazers, those experienced with a telescope and everyone in between.