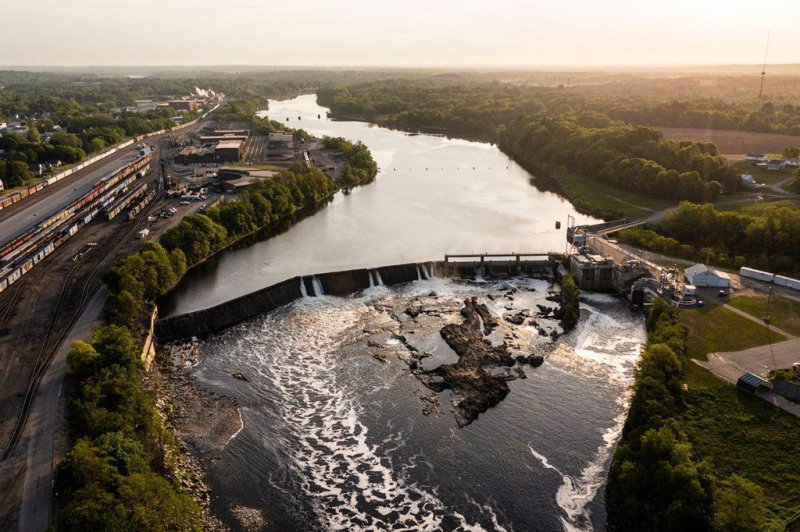 Conservation groups are pushing for four dams on Maine's Kennebec River, including the Lockwood Dam in Waterville, to be removed to make way for spawning salmon and other migratory fish. Photo by J.Monkman/NRCM

BANGOR, Maine, Nov. 18 (UPI) -- The debate over what hydroelectric dams contribute to the environment -- either as useful tools in the fight against climate change or an impediment to migratory fish and freshwater ecosystem health -- is heating up in Maine as officials decide the future of one power-generating embankment.

The proposed relicensing of a major dam on Maine's Kennebec River has officials and fishers, among others, once again wrestling with difficult questions about the environment and the future of the region's natural resources.

Earlier this year, the company withdrew its relicensing applications with Maine's Department of Environmental Protection and the Federal Energy Regulatory Commission after state regulators warned Brookfield that its water quality certificate was going to be denied.

According to Maine regulators, the dam, as it is being operated, is not sufficiently salmon friendly.

Federal protections for the iconic fish, which first was listed as endangered in 2000, stipulate that 96% of salmon that approach each dam on the lower Kennebec must pass safely upstream within 48 hours, but state regulators told Brookfield they'll accept no less than a 99% success rate.

With the Shawmut Dam's licenses in jeopardy, conservationists and environmental groups have seized the opportunity to push for the removal of four dams on the Lower Kennebec River, which they claim are keeping Atlantic salmon from reaching spawning grounds farther upstream.

"If they do get it relicensed, that means that you have to wait another 30, 40, 50 years before trying to take the dams out again, and by then it might be too late," Greg LaBonte, an avid fly fisher and founder of Maine Fly Guys, told UPI.

LaBonte, who said he typically is a strong supporter of all types of fish conservation efforts, remains unconvinced by the dam removal plans, but appreciates the urgency of advocacy groups like Trout Unlimited and the Atlantic Salmon Federation.

Atlantic salmon once were plentiful in all of Maine's major rivers, from the Saco to the St. Croix, returning by the thousands each year to spawn.

From 1912 to 1990, the first Atlantic Salmon caught in Maine's Penobscot River each season was delivered to the president of the United States.

The Penobscot still welcomes a few hundred returning salmon each year, but elsewhere on Maine's waterways, salmon runs rarely exceed a half-dozen fish. Most of those that return are not wild fish, but instead hatchery raised fish released into Maine rivers as juveniles, or smolts.

Environmental groups insist those numbers would be higher if not for the human-built barriers that prevent the natural movement of water, nutrients and fish.

It's not just the height of the dams that thwart salmon, which typically are powerful swimmers and adept leapers. Its also the nature of the water that accumulates above and below.

"The impoundments are really bad, too, because they're often filled with invasive species and are difficult to navigate because they don't have any obvious flows or riffles to guide the fish upstream," Landis Hudson, executive director of the nonprofit Maine Rivers, told UPI.

Impoundments also are one of the reasons why Hudson doesn't think Brookfield's dams, which generate hydroelectricity, should be viewed as a green energy solution. Impoundments on the Kennebec, which flows into the rapidly warming Gulf of Maine, elevate water temperatures.

"Main stem dams like we see on the Kennebec speed up the negative ecological impacts of climate change," Hudson said.

Some dams, including the Lockwood Dam in Waterville, are equipped with fish ladders that allow fish to bypass the dam, but finding the narrow passages isn't always easy.

Last spring, several fish had to be rescued after they became stranded in pools below the dam. Researchers suspect many spawning fish languish for weeks searching for a detour.

"If these fertile female salmon are hanging out below Lockwood so long that by the time they move past it, they are about to keel over, how can we expect these fish to recover, ladder or not?" Hudson asked rhetorically.

As of November, only 15 salmon made it to Lockwood Dam's fish ladder, according to the Maine Department of Natural Resources.

It's those modest numbers that inspire LaBonte's ambivalence toward the dam removal plans.

Like others, he worries that the dam's removal would imperil Sappi North America, a paper mill in Skowhegan that relies on water withdrawal from the impoundment behind Shawmut.

If the dam were removed, Sappi claims the mill would have to curtail operations, putting the livelihoods of several hundred Mainers in jeopardy.

"I could live with that if there was a guarantee that when you take the dams out, the anadromous fish were going to really bounce back," LaBonte said. But he's skeptical.

Salmon aren't the only species dams are impeding, however. They're just the most iconic.

"People rally around salmon for the same reasons they rally around a polar bear or moose," LaBonte said. "These are species that people get intrigue from for no other reason than being curious or romantic about the animal."

That's important for groups that may cultivate a more sophisticated appreciation for ecological health, but that rely on casual nature lovers for funding.

"When you're trying to fundraise or get social backing, it's hard to get that when you're talking about things that aren't well understood or covered in the media," LaBonte said. "If they were to say river herring or shad, people aren't going to get as excited about that because they don't have any relationship with those species."

Much more than salmon

Those less romantic species are where the benefits of dam removal shine through -- and evidence can be found just a few dozen miles downstream from Lockwood Dam.

"The Lower Kennebec and its tributaries, including the Sebasticook River, is probably one of the largest success stories for migratory fish on the Atlantic seaboard, with the return of a run of both alewives and shad -- previously stopped by the Edwards Dam in August that came out in 1999 -- in the millions," Jeff Reardon, Maine Brook Trout Project director at Trout Unlimited and a veteran of dam removal projects, told UPI.

In addition to alewives and shad, eels and herring all now return to the Kennebec in great numbers each year. The recovery quickly garnered the attention of riparian predators.

"The Sebasticook now hosts one of the largest concentrations of eagles on the East Coast," Reardon said. "Every tree on the river bank has one or more eagles in it for miles and miles."

Most of Maine's rivers are quite nutrient poor, so the influx of biomass and nutrients from the ocean are a boon for not just eagles, but also for ospreys, ducks and more.

With the removal of the four dams, beginning with Lockwood, Reardon and others estimate that success will spread upstream.

LaBonte said it might also allow pike, an invasive species and voracious predator, to travel farther upstream and access the salmon nurseries in the Sandy River.

But Reardon, whose organization occasionally supports dams and other barriers to stem the movement of invasive species, says pike prefer slower water -- the found above and below dams.

With the dams gone, fewer stretches of the Kennebec where pike can proliferate will exist. Besides, Reardon said, pike already are present in lakes connected to the Sandy River and Upper Kennebec.

"The explosion of pike that we've seen elsewhere, we wouldn't expect to see in this situation," Reardon said.

A plethora of problems

"There have been several other large, complicated dam removal projects in Maine, and each of those projects involved changes to infrastructure that were complicated and in some cases expensive, but people did come together to figure out how to fix them," Hudson said.

Reardon said he has been involved directly in efforts to design and build new water intake infrastructure for mills affected by dam removals.

"That's a problem that's solvable, it's just a question of engineering," he said.

The threat of losing even a modest economic engine in Central Maine moved the state's governor, Democrat Janet Mills, to publicly guarantee the protection of the Sappi mill. Mills has floated the idea of a "nature-like fishway," a newer technology more conducive to fish migration than traditional ladders.

LaBonte also suspects a compromise somewhere short of total dam removal is the most logical solution. He said it also might be time to abandon the dreams of salmon returning to the Kennebec in great numbers.

LaBonte cites a former mentor, Rory Saunders, Downeast Coastal Salmon Recovery Coordinator with the National Oceanic and Atmospheric Administration, who said, "Salmon aren't dying from any one cause. They're dying from a death by a thousand cuts."

"Dams are just one part of the problem. Salmon have many, many more, mostly out in the ocean," LaBonte said. "If you took just a small portion of the salmon recovery funding and used it for habitat restoration for striped bass and brook trout, we might be better off."

Science News // 1 hour ago
Study: People choose to learn about health, world news based on feelings
Dec. 3 (UPI) -- People choose whether to seek or avoid information about their health, finances and personal traits based on how they think it will make them feel and how useful it is, a Nature Communications study found.