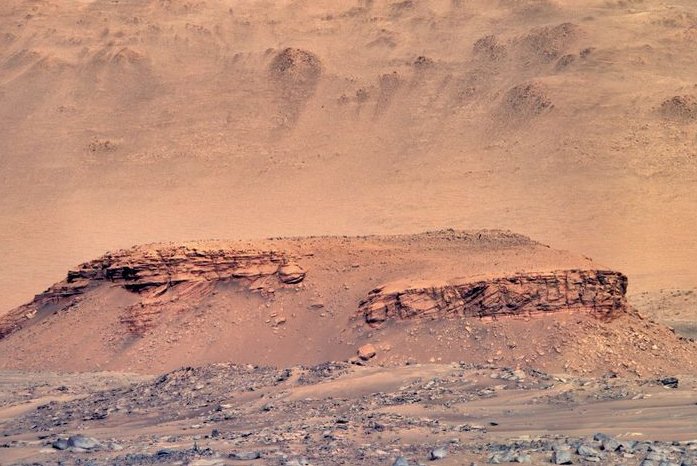 Oct. 7 (UPI) -- NASA's Mars rover Perseverance has confirmed that Jezero Crater on the Red Planet was the site of a lake and periods of violent floods that carried boulders into the crater, according to a scientific paper published Thursday.

The periodic flooding occurred while Mars was changing from a wetter planet to a dry one about 3.7 billion years ago, according to the paper authored by dozens of scientists at NASA and universities around the world.

The findings provide an unprecedented datapoint to understand Martian geology and history, and will guide decisions NASA makes about where to drill for rock samples that could show signs of ancient life on Mars, said Benjamin Weiss, one of the authors.

"The rover landed in this incredibly desolate landscape ... and without driving anywhere, just taking pictures in the distance, we saw rocks that confirm Jezero was the bottom of the lake millions of years ago," said Weiss, a professor of planetary sciences at Massachusetts Institute of Technology..

Every image tells a story.

Scientists tap into an array of imagers aboard @NASAPersevere to get a big picture of the Red Planet. These cameras also help determine which rock samples offer the best chance to learn whether life ever existed on Mars.https://t.co/ys8WRuupuT pic.twitter.com/0KHzOcTU5r— NASA Astrobiology: Exploring Life in the Universe (@NASAAstrobio) September 23, 2021

The paper, titled "Perseverance rover reveals an ancient delta-lake system and flood deposits at Jezero crater, Mars," was published in the journal Science.

According to the researchers, a rock formation known as Kodiak Butte in the images "indicates ... a closed lake system, under fluctuating water levels and changing styles of flow during later stages."

Such evidence indicates that "the climate on Mars [at that time] was warm and humid enough to support a hydrologic cycle on the Martian surface, at least episodically," the authors wrote.

The photos of Kodiak Butte show layers of fine clay or sand that builds up during periods of normal river flow, interspersed with layers of small boulders that come from flood events, the researchers said.

Scientists don't know what caused those floods, but they could have come from heavy rain or an ice melting suddenly, Weiss said.

"Mars, at the time, probably had more ice, which could have melted suddenly by volcanic activity or meteor impacts, sending a rush of water, rocks and silt into the crater," he said.

Weiss said he is particularly excited by the presence of such boulders, because they will provide details about the highlands around the crater.

"The region around the crater also was of high interest for a rover mission because it contains the oldest known rocks on Mars. Now, we can sample those rocks also, without even leaving the crater," he said.

The Mars rover is cut off from communication with Earth because the sun is situated between them for about two weeks. NASA expects to receive data again in about a week.

I'm parked in a sweet spot between dunes and a rock outcrop, ready for a 2-week solar conjunction, when the Sun blocks signals to and from Mars. During the lull, I'll tackle jobs I can do on my own, like watching for dust devils and taking in the weather.https://t.co/f6M1Vz2Q5h pic.twitter.com/70xSLczS9Q— NASA's Perseverance Mars Rover (@NASAPersevere) September 28, 2021

The findings were made possible because Perseverance carries several cameras that are superior to any taken to Mars previously, study co-author Amy Williams said.

"We now have these pictures that we really couldn't get from orbit, showing these boulders and conglomerate deposits that could only come from flood episodes," said Williams, an assistant professor of geological sciences and astrobiology at University of Florida.

She said the information from Jezero will help scientists determine more information about other craters on Mars that may have held lakes. Scientists long believed Jezero and other craters were lakes based on orbital images, while previous rover missions added further confirmation in limited areas.

"Seeing Jezero from spacecraft in orbit is like looking at the cover of a book," she said. "What we see now is like reading the pages in the book."

Weiss and Williams said they expect NASA to drill samples from the boulders and from the silt or sand layers of rock.

Perseverance's first drilling attempt on Mars in August targeted a rock that appeared to be from the silt layers, but it was so brittle that it disintegrated.

"We have complete confidence that we'll be able to sample clay or a mudstone or shale," Williams said.

"It seems like there was something rather [unusual] about our first core that we're still trying to understand, but we've tested the drilling on Earth, and it was successful in a variety of environments."

Science News // 15 hours ago
Parasites, pesticides, climate change linked to loss of honey bee colonies
Jan. 30 (UPI) -- About 43% of honey bee colonies were lost in the span of one year, according to a new study that considered multiple factors that put a crucial part of the ecosystem at risk.

Science News // 4 days ago
New asteroid expected to make very close pass to Earth this evening
Jan. 26 (UPI) -- Earth is set for a very close shave with a small asteroid Thursday just five days after it was discovered by an amateur astronomer in Crimea, according to NASA's Jet Propulsion Laboratory.

Science News // 6 days ago
NASA, DARPA partner for nuclear space rocket test
Jan. 24 (UPI) -- NASA is partnering with the Defense Advanced Research Projects Agency to demonstrate the use of a nuclear thermal rocket engine in space, the two agencies announced in a statement Tuesday.

Science News // 1 week ago
NASA delays Rocket Lab launch in Virginia until Tuesday
Jan. 23 (UPI) -- NASA on Monday scrubbed the Rocket Lab's launch of its Electron rocket from Virginia because of poor weather conditions, moving the possible liftoff to Tuesday.