Robotic arm to help astronauts will head to space station 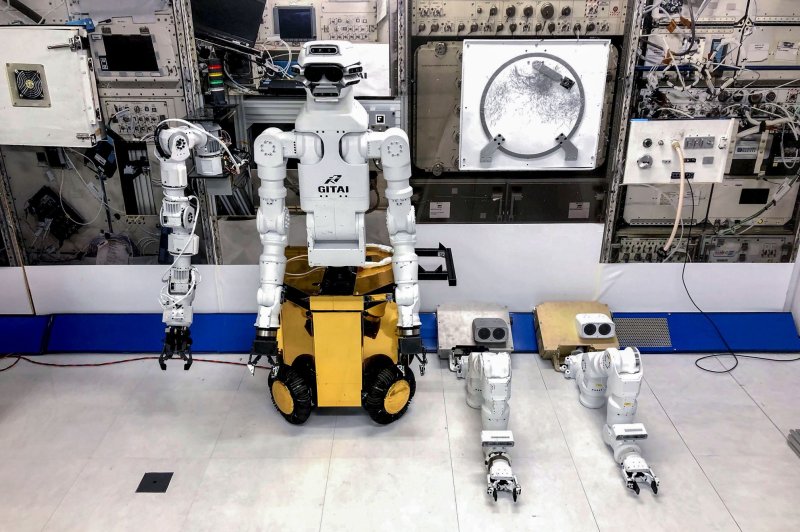 A fully assembled GITAI robot and several robotic arms are shown as the Japanese company prepares to launch an experiment to the International Space Station. Photo courtesy of GITAI Japan

ORLANDO, Fla., Aug. 27 (UPI) -- Part of a robot that could help perform routine tasks for astronauts is among the cargo on SpaceX's planned launch Saturday to the International Space Station from Florida.

Tokyo-based GITAI Japan is developing the S1 robotic arm to work in space much like industrial robots work on Earth.

Liftoff of the Falcon 9 rocket carrying the arm, supplies and science experiments is planned for 3:37 a.m. EDT from Complex 39-A at Kennedy Space Center. The CRS-23 mission is the 23rd for SpaceX as part of NASA's commercial resupply program.

Weather for the launch is expected to be only 50% favorable due to possible stormy conditions, according to a U.S. Space Force forecast. Poor weather could force a postponement.

RELATED NASA mulls how to dispose of International Space Station

The first stage of the rocket will be used for the fourth time, having already launched a satellite and two astronaut missions to the space station. Elon Musk's SpaceX intends to land it again on a barge in the Atlantic Ocean after launch.

The capsule for the mission previously flew once before on another cargo flight. It is scheduled to dock at the space station about 11 a.m. EDT on Sunday.

Once it arrives, astronauts will unpack thousands of pounds of cargo, including the robotic arm.

"The experiment will test activities that the crew do daily on the ISS, like flipping switches, turning knobs or unplugging equipment," Toyotaka Kozuki, GITAI's chief technology officer, said in a news conference Tuesday.

The robotic arm is about the size of a human arm, and the entire installation weighs about 44 pounds, Kozuki said.

The robotic arm will be installed inside the Bishop Airlock, a science laboratory that is a permanent part of the space station. The arm sometimes will be operated remotely by Houston-based Nanoracks, the private company that owns and operates the airlock.

But most of the experiment will be done autonomously while operators observe through cameras.

"We will assemble small parts together, such as tightening screws, and we make that procedure tricky enough even for humans," Kozuki said.

Many other robots have been used on the space station, including NASA's Astrobees, two of which are at the orbiting laboratory now. The Astrobees are free-floating in the microgravity of space and help perform science experiments and inspections.

Other robots have included the head-shaped CIMON, which can communicate with astronauts verbally and has the representation of facial expressions on a screen.

Gitai's robotics are designed for more manual tasks, and therefore must be mounted, said Yuske Taguchi, director of business development.

"So, we're focused more on being able to complete a task that we designed the robot to do, but not be capable of doing everything that someone would ask," Taguchi said.

We are TWO days away from @SpaceX's 23rd commercial resupply services mission!

Other experiments on CRS-23 are monitors for crew eye health, construction materials that will be exposed to the harsh environment of space and an examination of plant material to see how it responds to microgravity, according to NASA.

The eye experiment, developed at the German Aerospace Center in Cologne, has the potential to develop new methods to detect eye changes in astronauts as they live in near-weightlessness, said Claudia Stern, the project's lead investigator.

The new eye exams would use two small scopes and an interface that attaches to an astronauts' tablet computer -- weighing less than a pound, she said.

"We plan to validate this technology for use in space, but on Earth, this could have applications in detecting common eye problems, including glaucoma," Stern said.

Science News // 8 hours ago
Asteroid 4 times larger than Empire State Building to fly past Earth
A massive asteroid over a mile wide is expected to make a closer-than-normal trip past the Earth near the end of May, an approach so close that it could be spotted in the sky.