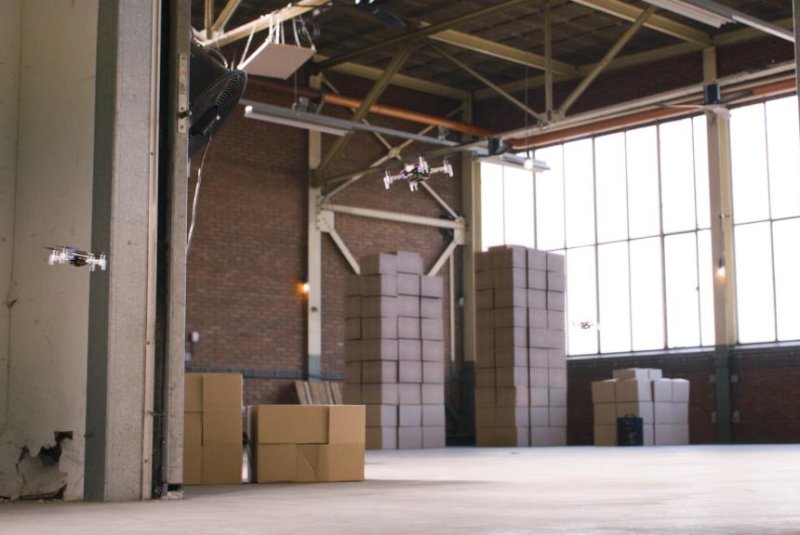 Scientists have developed a swarm of drones that autonomously track down gas leaks in big buildings and industrial sites. Photo by TU Delft

July 14 (UPI) -- An international team of engineers has developed an autonomous swarm of tiny drones capable of locating gas leaks.

The breakthrough technology, detailed in a paper made public on ArXiv, could help keep firefighters and other emergency personnel safe.

Currently, gas leaks at an industrial site or inside a large building must be investigated by firefighters sporting gas masks and gas-sensing instruments.

The task sometimes takes a considerable amount of time, putting firefighters and other emergency responders at serious risk.

But robotizing the process isn't easy. To begin, even the most sensitive gas sensors aren't as effective as animals trained to sniff out gas leaks.

What's more, navigating the kind of complex environs where emergency gas leaks present themselves is exceedingly difficult for even the most adept autonomous robots.

Previous attempts to outsource this dangerous and difficult task have mostly relied on single robots. These gas-sniffing robots were relegated to small, obstacle-free environments.

Instead of relying on a solitary robot, scientists at TU Delft in the Netherlands, the University of Barcelona and Harvard University decided to train a group of tiny robots.

"The drones' tiny size makes them very safe to any humans and property still in the building, while their flying capability will allow them to eventually search for the source in three dimensions," study co-author Guido de Croon said in a press release.

"Moreover, their small size allows them to fly in narrow indoor areas. Finally, having a swarm of these drones allows them to localize a gas source quicker, while escaping local maxima of gas concentration in order to find the true source," said de Croon, a professor at TU Delft.

Tiny robots are more agile, but they leave less room for the kind of computing power needed for artificial intelligence. In addition to tracking down gas leaks, the drones have to be programmed to communicate and collaborate.

"In nature, there are ample examples of successful navigation and odor source localization within strict resource constraints," first author Bart Duisterhof said in a press release.

"Just think of how fruit flies with their tiny brains of [roughly] 100,000 neurons infallibly locate the bananas in your kitchen in the summer," said Duisterhof, who led the research while working on his masters thesis at TU Delft.

"They do this by elegantly combining simple behaviors such as flying upwind or orthogonally to the wind depending on whether they sense the odor," Duisterhof said. "Although we could not directly copy these behaviors due to the absence of airflow sensors on our robots, we have instilled our robots with similarly simple behaviors to tackle the task."

As long as no gas is detected, the drones are programmed to spread out as much as safely possible. If one of the drones detects gas, it tells the other robots.

Gas detection activates the "particle swarm optimization" algorithm, which the swarm uses to collectively find and move in the direction of higher and higher gas concentrations until the leak is located.

"This research shows that swarms of tiny drones can perform very complex tasks," said De Croon. "We hope that this work forms an inspiration for other robotics researchers to rethink the type of AI that is necessary for autonomous flight."

Though the drones aren't quite ready for deployment in an emergency situations, scientists are currently working to perfect their navigational abilities.

In the future, the drones could be used to not only track down gas leaks, but also search for methane on Mars or screen for diseases.

The research team responsible for the novel drone swarm are scheduled to present their technology later this year at the IROS robotics conference.

Science News // 1 hour ago
HGH receptor gene may have helped early humans survive periods of scarcity
Sept. 24 (UPI) -- The relative ease of modern life may explain why a variant of the human growth hormone receptor gene known as GHRd3 is now so rare, according to a new study.

Science News // 3 hours ago
Genomic data illuminates origin, legacy of the Etruscans
Sept. 24 (UPI) -- Before the Roman Empire, the Italian peninsula was dominated by another sophisticated confederation, the Etruscans. After centuries of debate, new genomic analysis has offered fresh insights into their origins.