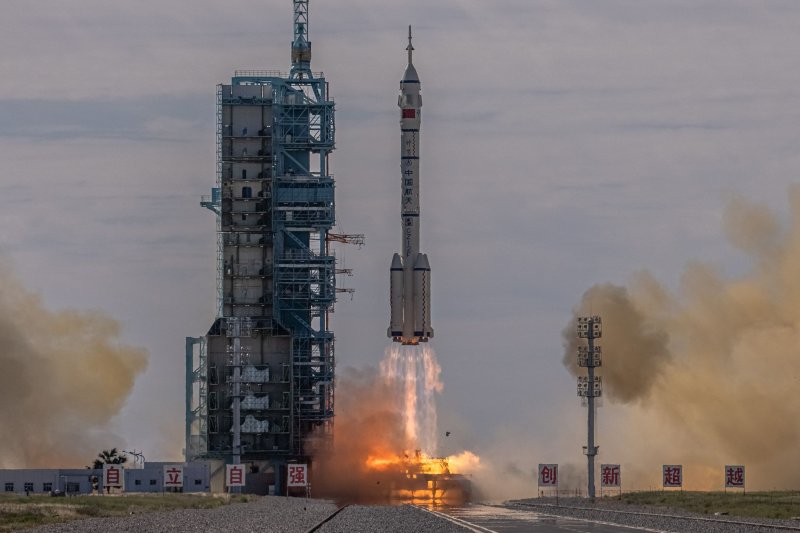 The Long March-2F carrier rocket, carrying the Shenzhou-12, takes off from the launch site at the Jiuquan Satellite Launch Center, in the Gobi Desert, Inner Mongolia, near Jiuquan, China, on Thursday. Photo by Roman Pilipey/EPA-EFE

June 16 (UPI) -- China on Thursday launched three astronauts into space on the Shenzhou-12 craft that will later in the day dock with Beijing's new space station.

"Into the Space!" cheered Hua Chunying, a Chinese foreign ministry spokeswoman, via Twitter shortly after the launch. "[Shenzhou-12] has been successfully launched. History will remember this day,"

The three Chinese astronauts onboard -- flight commander Nie Haisheng, 57, and his crew, Liu Boming, 55, and Tang Hongbo, 46 -- are to later in the day rendezvous and then dock with the Tianhe core module of the space station to become another part of the orbital that is currently being constructed.

The trip from launch to dock is expected to take 6-and-a-half hours, China's The Global Times reported.

According to CGTN, after docking, they will move into the core module where they will live and work in low-Earth orbit for three months before returning aboard the re-entry capsule to the Dongfeng landing site.

Space station Taingong, which translates to Heavenly Palace, will become the second long-term orbital alongside the International Space Station and is intended to be used by China's space program as an orbiting laboratory, The New York Times reported.

It is expected to be completed following about 10 launches over the next two years with Thursday's launch being the first manned mission to the station.

China had launched the core module into space at the end of April. The rocket used to put the module into orbit prompted international concern over a 10-day period as it fell uncontrolled back to Earth. The booster eventually re-entered Earth's atmosphere and debris from it crashed into the Indian Ocean on May 9.

Science News // 18 hours ago
Humans used tools to make clothes more than 100,000 thousand years ago
Sept. 16 (UPI) -- Humans living on the Atlantic coast of what's now Morocco were making clothes from animal hides between 120,000 and 90,000 years ago, according to a new study.

Science News // 22 hours ago
Inspiration4 crew circles the Earth on mission's first full day
ORLANDO, Fla., Sept. 16 (UPI) -- The crew of the first all-private orbital space mission has spent Thursday, the first full day of the mission, circling the Earth every 90 minutes at over 17,000 mph.

Science News // 23 hours ago
New Zealand schoolchildren discover new species of giant penguin
Sept. 16 (UPI) -- In 2006, a group of schoolchildren on a fossil-hunting field trip in New Zealand unearthed the bones of a giant penguin. Now, 15 years later, that flightless bird is getting a name, Kairuku waewaeroa.

Science News // 23 hours ago
Study: Cotton towel best option for homemade face masks
If you're making your own face mask to protect against COVID-19, three layers of cotton towel fabric are best, researchers from India report.

Science News // 1 day ago
Milk fueled migration across Eurasian steppe 5,000 years ago
Sept. 15 (UPI) -- Hardened dental plaque coating the ancient teeth of Bronze Age pastoralists suggests the emergence of dairying and milk-drinking coincided with a wave of migration across the Pontic-Caspian steppe.
Advertisement