"The big cicada-palooza is about to begin!"

Those are the words of entomologist and bug enthusiast Michael Raupp from the University of Maryland. In a couple of months, he said, billions if not trillions of singing cicadas will emerge from the ground across a large swath of the eastern United States. It will be a party that has been 17 years in the making.

As May's warmer weather approaches, large swaths of Brood X cicadas will emerge from their 17-year underground hiatus and cover much of the Southeast, mid-Atlantic and Great Lakes regions, spreading over 15 states with their loud buzzing and egg laying.

Raupp told AccuWeather that it remains a general mystery as to how cicadas know when 17 years has passed or what triggers their re-emergence. However, he did say that soil temperature likely plays a crucial role.

"What we know is that when soil temperatures reach roughly 64 degrees Fahrenheit at a depth of about a foot or 18 inches, that is the signal -- that's Mother Nature's clue -- that the world is now warm enough for cicadas to get up and out of the ground," Raupp said. That temperature is crucial for cicadas because by that point, leaves will have sprouted on tree branches -- something needed for egg laying, he added. "That's basically their environmental cue that the world is now warm enough to get out of the ground and do the business that cicadas are gonna do."

While Brood X, or Brood 10, is not the largest group of periodical cicadas, the brood has tremendous reach across the eastern United States and puts them on a lot of peoples' radar.

There are 15 periodical broods of cicadas and two appear to have gone extinct. As opposed to annual broods, which emerge every year from July to September, periodical broods stay underground for either 13 or 17 years, depending on the brood.

According to Raupp, this one is unique because it is known as "the big brood" and has the largest geographic distribution, with cicada populations ranging from Georgia up to New York. With cicadas emerging across an area that widespread, and with so many stuck in their homes due to the pandemic, it will make for a wonderful learning opportunity for millions of people, Raupp said.

"There are simply going to be billions if not trillions of periodical cicadas emerging from the ground," Raupp said. On "bright, sunny days in May," he advises, "get outside, enjoy those songs, go watch some cicadas. It's gonna be spectacular."

Once outside, the sunniest days of the midsummer will also be the noisiest, he said. The three distinct species of cicadas in Brood X all have distinct calls, he said, and the combination is sure to make for a boisterous chorus.

Raupp said that on bright, sunny days when the greatest number of cicadas are active, "It's really gonna be loud." How loud? The noise created by Brood X "can be as loud as 80 to 100 decibels," Raupp added. "That's the sound equivalent of a lawnmower or a jet aircraft going overhead. So they're gonna be having fun, it's gonna be noisy."

During their 17-year stay underground, the cicadas aren't exactly napping. John Cooley, a researcher with the University of Connecticut, told AccuWeather last year that in the years between emergences, cicadas are busy eating tree roots and digging tunnels.

This coming spring, AccuWeather meteorologists say temperatures should be ripe for their midspring emergence.

"This May should be 1-2 degrees above normal, which means many days with highs in the upper 70s and low 80s and nighttime lows in the 50s and low 60s," AccuWeather senior meteorologist Dale Mohler said.

Farther west, historical averages in Illinois and Michigan also suggest that May should make for an ideal time for arrivals.

In 2017, Brood X cicadas prematurely showed up in the Baltimore area and experts such as Raupp believe those early risers may have been "accelerators" of this year's brood, a group that appears abnormally early.

"Brood X is the 17-year group living in the capital region and will be emerging next spring. Of course, leaving the fate of your brood up to one year is very risky, so periodical cicadas also have some individuals that emerge a little early or a little late," Raupp previously wrote. "These "stragglers" hedge against less productive years. Stragglers that start broods of their own are called 'accelerations.' The cicadas that emerged in this region in 2017 may have been an 'acceleration' of Brood X."

Should the 2021 crew show up as expected, it would mark the 18th documented appearance of the Brood X cicadas, dating back to their first chronicling in 1715. According to The Pennsylvania Magazine of History and Biography, the brood was first noted by the Rev. Andreas Sandel in Philadelphia and then again by botanist John Bartram in 1732.

After their third emergence in 1746, Swedish explorer Pehr Kalm wrote about his amazement at the brood's vast spread and how constant their buzzing was.

"The general opinion is that these insects appear in these fantastic numbers in every 17th year. Meanwhile, except for an occasional one which may appear in the summer, they remain underground," he wrote in 1756 paper for a Swedish academic journal.

In popular culture, this particular brood has worked its way into books, poems and even in Bob Dylan's song, "Day of the Locusts". Dylan's 1970 album New Morning came out the same year Brood X cicadas swarmed Princeton, N.J., where he went on to receive an honorary degree that summer.

While Dylan referred to them as locusts in his song, thinking they were other noisy insects from the summer, historical appearances of the Brood X show they were likely this exact brood of cicadas descending on his area. 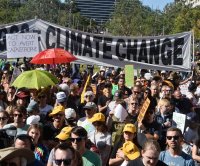