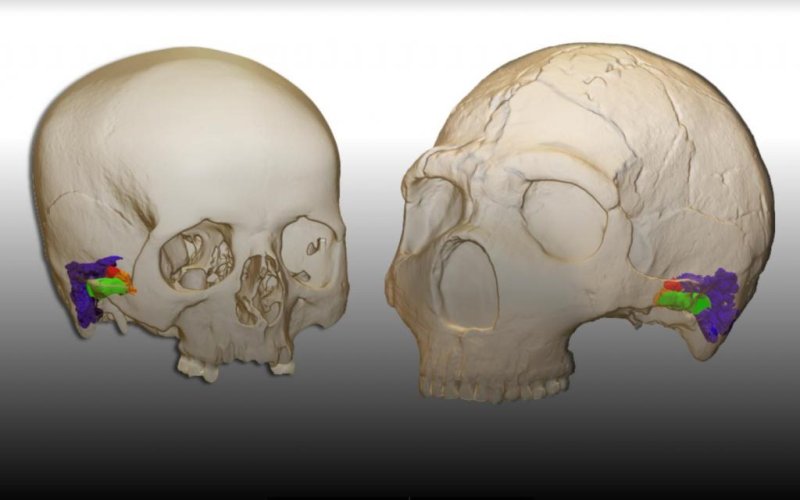 Neanderthals likely could have perceived and produced speech similar to modern humans, according to models of both species ear structures. Photo by Mercedes Conde-Valverde

For the study, published Monday in the journal Nature Ecology and Evolution, researchers used computed tomography scans to build 3D models of the ear structures in Neanderthals, Homo sapiens and Neanderthal relatives unearthed at Atapuerca, an archaeological site in Spain.

The findings suggest the origins of human language can be traced to our closest hominin relatives.

RELATED Some of our gut microbiota predates the human-Neanderthal split

"This is one of the most important studies I have been involved in during my career," study co-author Rolf Quam said in a press release.

"The results are solid and clearly show the Neandertals had the capacity to perceive and produce human speech. This is one of the very few current, ongoing research lines relying on fossil evidence to study the evolution of language, a notoriously tricky subject in anthropology," said Quam, an anthropology professor at Binghamton University.

Of course, scientists can never know exactly how Neanderthals communicated, but by studying their adulatory capabilities, researchers were able to formulate informed inferences about Neanderthals' linguistic capacities.

The algorithms showed the hearing capabilities of Neanderthals at frequencies between 4 and 5 kHz were superior to those of the Atapuerca hominins.

Researchers were also able to use the computer models to calculate Neanderthals' occupied bandwidth, the frequency range that their hearing was most sensitive to. The wider the range, the more easily a species was able to distinguish between a diversity of sounds.

"This really is the key," said lead author Mercedes Conde-Valverde, professor at the Universidad de Alcalá in Spain. "The presence of similar hearing abilities, particularly the bandwidth, demonstrates that the Neandertals possessed a communication system that was as complex and efficient as modern human speech."

The latest analysis also showed Neanderthals were likely capable of producing a range of consonants comparable to the verbal abilities of humans.

"Most previous studies of Neanderthal speech capacities focused on their ability to produce the main vowels in English spoken language," said Quam. "However, we feel this emphasis is misplaced, since the use of consonants is a way to include more information in the vocal signal and it also separates human speech and language from the communication patterns in nearly all other primates."

"The fact that our study picked up on this is a really interesting aspect of the research and is a novel suggestion regarding the linguistic capacities in our fossil ancestors," Quam said.

By documenting the shifts in the inner ear structures from Atapuerca hominins to Neanderthals to modern humans, researchers were able to trace the evolution of more fine-tuned hearing abilities.

The authors of the latest study suggest these changes evolved in response to a similarly advancing capacity to produce complex speech sounds.

The latest findings suggest the speech and hearing capabilities of Neanderthals may have also been more sophisticated than previously estimated.

Science News // 2 hours ago
NASA delays Mars helicopter flight again for software update
ORLANDO, Fla., April 13 (UPI) -- NASA has postponed the flight of the Mars helicopter Ingenuity, the first controlled flight on another planet, to work through a software problem.

Science News // 10 hours ago
Experts: NASA will continue working with Russia on space despite China plan
ORLANDO, Fla., April 13 (UPI) -- Russia and NASA will continue to cooperate in space in the near future, even as Russia moves to work with China on lunar exploration, experts said.

Science News // 19 hours ago
Plastic particles proliferate globally, spread by ocean waves and through the air
April 12 (UPI) -- New research highlights the ways microplastic can become airborne, transported across the continents and deposited across the globe.