Researchers say that megatheropods dominated their ecosystems, which explains why there are fewer species of smaller dinosaurs. File Photo by John Angelillo/UPI | License Photo

Feb. 25 (UPI) -- By dominating ecological niches that might have otherwise hosted a diversity of smaller carnivores, so-called "megatheropods" dramatically altered the structure and diversity of dinosaur communities throughout the Mesozoic.

For more than 150 million years, dinosaurs dominated Earth's ecosystems and food chains, but for all their dominations, dinosaurs boasted surprisingly low rates of speciation.

RELATED Giant dinosaur hunted from the shoreline like a bird, not an aquatic predator

"Dinosaur communities were like shopping malls on a Saturday afternoon -- jam-packed with teenagers," study leader Kat Schroeder said in a press release.

"They made up a significant portion of the individuals in a species, and would have had a very real impact on the resources available in communities," said Schroeder, a graduate student at the University of New Mexico.

Though T. rex gets most of the attention, the ecosystems of the Mesozoic era, which stretched from 252 million to 66 million years ago, featured a diversity of large-bodied dinosaurs.

To better understand how species differed among small, medium and large dinosaurs, researchers analyzed the fossil records compiled at dozens of dig sites all over the world.

The sorting process revealed an obvious pattern. In communities where megatheropods were present, researchers found evidence of very few dinosaur species weighing between 200 pounds and one ton.

The analysis showed the evolutionary impacts of megatheropods changed over time.

"Jurassic megatheropods don't change as much -- the teenagers are more like the adults, which leaves more room in the community for multiple families of megatheropods as well as some smaller carnivores," Schroeder said.

"The Cretaceous, on the other hand, is completely dominated by Tyrannosaurs and Abelisaurs, which change a lot as they grow," Schroeder said.

Science News // 3 hours ago
Scientists put the quantum freeze on human-scale object
June 17 (UPI) -- For the first time, scientists have brought a human-scale object to a near standstill, turning the Laser Interfrometer Gravitational-wave Observatory's four mirrors into a quantum object. 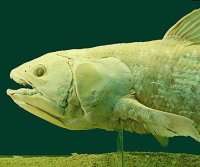 Science News // 12 hours ago
Engineers unveil solar-powered AI system-on-chip
June 17 (UPI) -- AI systems typically use lots of energy and rely on the cloud, which presents IT security issues. Scientists in Switzerland have addressed these problems by squeezing an AI system onto a single computer chip.