An illustration shows the United Arab Emirates' Mars Hope orbiter firing thrusters to slow itself down as it enters Mars orbit, which is scheduled to happen Tuesday. Image courtesy of Mohammed Bin Rashid Space Centre

ORLANDO, Fla., Feb. 8 (UPI) -- A new era of Mars exploration will begin Monday with the expected arrival of the United Arab Emirates' Hope spacecraft in the vicinity of the Red Planet -- the first of three such arrivals planned for February.

The UAE probe will near Mars late Monday, and the mission will make a final, 27-minute orbital insertion burn, or correction, starting at 10:30 a.m. EST Tuesday.

Hope's arrival is to be followed Wednesday by China's Tianwen-1 probe and NASA's Perseverance rover Feb 18.

Tense moments await all three missions because reaching the planet is only a first step in a complex series of maneuvers to either gain a precise, intended orbit or land on the surface, said Briony Horgan, a NASA Perseverance team scientist.

When it arrives, the NASA rover will make a brief automated trip through the atmosphere to land in a crater filled with boulders and fields of sand.

"We've spent eight years preparing ... so it's a little overwhelming that all of that hangs on just seven minutes of nail-biting descent through the atmosphere to the surface," said Horgan, an associate professor of planetary science at Purdue University in Indiana.

Horgan and other scientists said they eagerly await science and images from all three missions, although celebrations are mostly virtual and distanced due to the pandemic.

All three lifted off in July for the 300 million-mile journey when Mars made its closest approach to Earth.

Buildings and monuments in Dubai have been lit in red to commemorate the arrival, according to the United Arab Emirates Space Agency.

The Hope probe's two-year mission is to gain the most complete data about Mars' atmosphere ever, including Mars summers and winters, day and night, at all locations around the planet.

The Emirati government chose a Mars mission to ignite space research and industry there, according to the UAE space agency.

Technicians and engineers at the University of Colorado Boulder provided advice and guidance, but UAE citizens built most of the Hope probe in Colorado. Final assembly occurred in Dubai.

If successful, the UAE would become the fifth nation to reach Mars, following the United States, Russia, China and India.

NASA and the former Soviet Union sent numerous probes past Mars starting in the early 1960s, but the first mission to orbit the planet was the United States' Mariner 9 in 1969.

The first successful landing on the Red Planet was the Soviet's Mars 3 mission in 1971, but it stopped transmitting data a little after 14 seconds passed. The U.S. Viking mission sent back the first photos from the Martian surface in 1976.

As Hope travels close to Mars on Tuesday, it will fire thrusters for 27 minutes to spin around and begin backing into the orbit that is needed to survey the Martian atmosphere. It will slow down from about 75,000 mph to 11,200 mph.

The spacecraft's systems are functioning well, and it was able to reach Mars with fewer thruster burns to correct its path than anticipated, Omran Sharaf, program director for the Hope mission, said in an interview Friday.

Once it reaches the correct orbit, the UAE will spend two months testing its systems, Sharaf said.

"Then we need to calibrate the device to make sure it's accurate enough, it's clear enough so that scientists can benefit from it," he said.

Studying the atmosphere also is part of the Chinese Tianwen-1 orbiter's mission, which also carries a rover. The exact time of arrival at the Red Planet on Wednesday hasn't been disclosed by the China National Space Administration.

China has set up its own global system of deep-space monitoring telescopes, while the NASA and UAE missions will use the United States' Deep Space Network that uses radio astronomy observatories in California, Madrid and Canberra, Australia.

"Tianwen-1 has already sent back a new image of Mars, which I never get sick of seeing through new robot eyes for the first time, and I'm looking forward to their rover landing later in the year," Horgan said.

Almost two weeks later, Perseverance is due to make fiery entry into the Mars atmosphere at roughly 12:30 p.m. EST on Feb 18.

NASA and scientists around the nation will undergo what the agency calls "seven minutes of terror" when the heat of entering the atmosphere prevents any communication.

After that, and another 11-minute delay for the signal to reach Earth, NASA will know if the rover landed successfully.

Perseverance also will undergo months of testing to ensure all systems are working before starting a quest to find signs of ancient life in Mars' Jezero Crater, thought to be an ancient lakebed and river delta.

Those systems include a drill to excavate cylinders of rock that will be sealed and left on the surface of the planet to collect in future missions.

Those rocks may not return to Earth for another 10 years because NASA has to launch two more probes -- one to retrieve the samples and fire them into orbit, and another to grab the orbiting cargo and fly back to Earth.

A single mission couldn't accomplish all of those goals due to the extreme technical challenges and limits of NASA's budget, but the European Space Agency also has committed to building major parts for future retrieval missions.

The first helicopter to fly on another planet -- Ingenuity -- is riding underneath Perseverance. NASA expects to test the helicopter after the rover drops it on the surface, sometime in the next few months.

NASA’s Curiosity Mars rover used two different cameras to create this panoramic selfie, comprised of 60 images, in front of Mont Mercou, a rock outcrop that stands 20 feet tall on March 26, 2021, the 3,070th Martian day, or sol, of the mission. These were combined with 11 images taken by the Mastcam on the mast, or "head," of the rover on March 16. The hole visible to the left of the rover is where its robotic drill sampled a rock nicknamed "Nontron." The Curiosity team is nicknaming features in this part of Mars using names from the region around the village of Nontron in southwestern France. Photo courtesy of NASA/JPL-Caltech/MSSS

Science News // 9 hours ago
NASA to announce fate of tremor-detecting InSight Mars lander
ORLANDO, Fla., May 17 (UPI) -- Despite being ravaged by dust storms and struggling to stay powered, NASA's InSight Mars lander has managed to keep making scientific findings -- including its recent detection of a powerful Marsquake.

Science News // 21 hours ago
Scientists find evidence of water in Mars rock, but no signs of life
May 16 (UPI) -- Swedish scientists say a study of a meteorite from Mars indicates that it had only very limited exposure to liquid water -- an indication that it's unlikely life was present on the Red Planet in recent times. 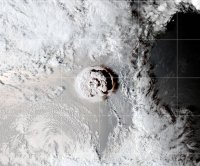 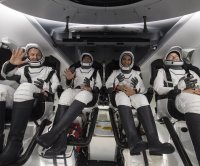