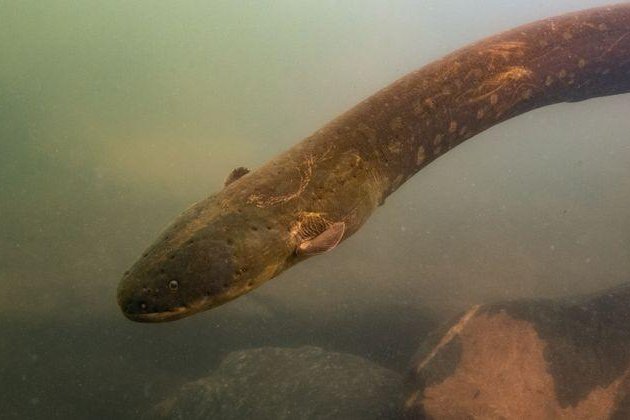 Each Volta electric eel can produce a shock of up to 860 volts, the strongest shock of any animal on planet Earth, making a group hunt a potentially effective method of gathering food. Photo by L. Sousa

But in an extraordinary find, scientists have for the first time observed electric eels gathering by the dozens and coordinating group hunts in the Amazon.

Scientists liken the behavior to a pack of wolves or dolphins, both of which work together to corral prey before killing and eating their victims.

While there are a few dozen mammal species known to hunt in groups, the behavior has previously been observed in just nine fish species -- none of them electric fish.

The discovery -- described Thursday in the journal Ecology and Evolution -- was first made along the banks of the Iriri River in Brazilian state of Pará.

But over the last several years, field surveys in the region, as well as genomic analysis led by David de Santana, fish research associate at Smithsonian's National Museum of Natural History, have revealed the presence of at least three different species.

One of the three is the Volta electric eel, Electrophorus voltai, the species that de Santana and his research partners watched gather and hunt in a small river-fed lake.

Electric eels belong to an order of South American electric fishes called Gymnotiformes. Though they look similar to "true eels," a diverse group of fish belonging to the order Anguilliformes, they are only distantly related.

The electric eel hunting party was first observed by Douglas Bastos, a doctoral student working under de Santana. Bastos spotted the phenomena at dusk, when there was just enough light to make out the bodies of roughly 100 eels forming a swirling circle.

"He was camping there alone, only with the companion of electric eels, jaguars and Caymans," de Santana told UPI in an email.

Bastos watched as the eels circled faster and faster, herding hundreds of small tetras into a small circle. Once corralled, small groups of ten eels or so separated from the circle to collectively shock their prey.

Bastos later returned with de Santana and other researchers to document the behavior. That researchers had to travel for five days up the Iriri into the vast wilderness of the Amazon may go part of the way toward explaining why there's no record of such behavior in the scientific literature.

RELATED Electric eels curl up to deliver a powerful shock

"Another factor is that many times, in the case of freshwater fishes, they live at the bottom of murk rivers -- that make impossible to make any kind of observation on their behavior," de Santana said.

Scientists may not always be able to see what electric eels are up to, but if they somehow found themselves in the middle of a swirling circle of eels and are mistaken for prey, they would certainly be able to feel it.

Each Volta electric eel can produce a shock of up to 860 volts, the strongest shock of any animal on planet Earth. A group of ten could yield 8,600 volts of electricity, roughly the amount needed to power 100 light bulbs.

De Santana has been shocked a few times.

"I usually feel my arm numb," he said. "The shock is strong, however, it has very short duration, one to three milliseconds."

For now, de Santana and his research partners know relatively little about how exactly this group hunt works. From what they witnessed, it's obvious some level of coordination is involved -- but how that coordination came to be isn't yet clear.

"We do not know whether this behavior involves cognition," de Santana said. "If so, they would use low voltage discharges to communicate during this event."

For now, the scientists suspect social predation emerged at small scales, with a few eels coming to the basic understanding that foraging alongside peers can prove successful. As this strategy becomes common, larger and larger groups are able to form.

Scientists plan to soon return to the Iriri to investigate the social dynamics of hunting parties -- that is, analyze the relationships between eels that hunt in groups.

Scientists want to know whether more closely related electric eels are more likely to break off into groups and shock trapped tetra fish.

The research team also plans to measure the shocks deployed by the fish during the entirety of the feeding process, in order to better understand how the both the corralling phase and shock phases are coordinated by the participants.