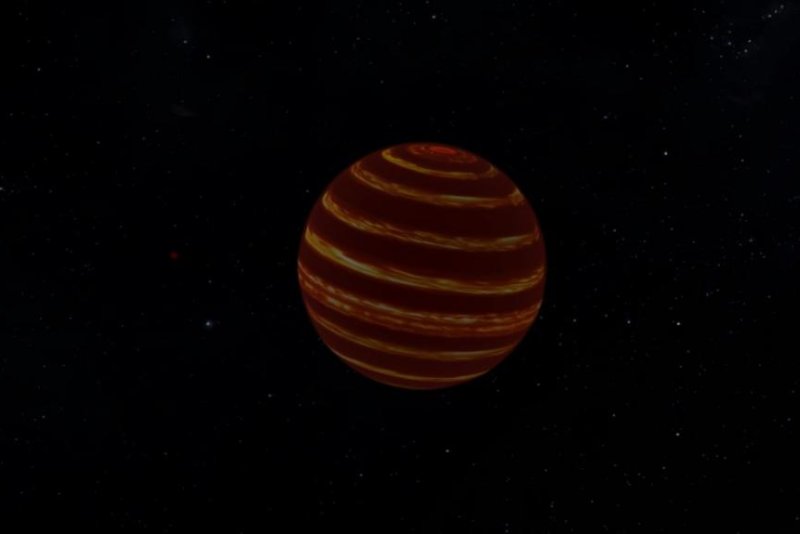 The stripes found on the brown dwarf closest to Earth suggests the object hosts wind bands and jet streams, similar to the atmospheric circulation patterns found on Jupiter. Photo by Daniel Apai

Jan. 7 (UPI) -- The brown dwarf closest to our solar system hosts wind bands and jet streams, according to new analysis of the object's atmosphere.

Brown dwarfs are too big to be planets but not quite massive enough to generate fusion, a prerequisite for stellar classification. Though hot in their infancy, brown dwarfs steadily cool as they mature, making them difficult to spot and study.

"We wondered, do brown dwarfs look like Jupiter, with its regular belts and bands shaped by large, parallel, longitudinal jets, or will they be dominated by an ever-changing pattern of gigantic storms known as vortices like those found on Jupiter's poles?" lead study author Daniel Apai, an associate professor of astronomy at the University of Arizona, said in a news release.

To settle their curiosity, Apai and his colleagues developed a new technique for visualizing the atmospheres of brown dwarfs.

"Knowing how the winds blow and redistribute heat in one of the best-studied and closest brown dwarfs helps us to understand the climates, temperature extremes and evolution of brown dwarfs in general," he said.

The survey efforts focused on Luhman 16b, which is roughly 28 times more massive than Jupiter and more than 1,500 degrees Fahrenheit hotter. Luhman 16b is slightly smaller than its brown dwarf companion.

"With advanced algorithms developed by members of our team, we were able to obtain very precise measurements of the brightness changes as the two brown dwarfs rotated," Apai said. "The brown dwarfs get brighter whenever brighter atmospheric regions turn into the visible hemisphere and darker when these rotate out of view."

By recording changes in brightness as the brown dwarfs rotated, researchers were able to compile a rough sketch of their atmospheres. The data showed atmospheric circulations on brown dwarfs are similar to those found on solar system planets.

"Our study provides a template for future studies of similar objects on how to explore -- and even map -- the atmospheres of brown dwarfs and giant extrasolar planets without the need for telescopes powerful enough to resolve them visually," Apai said.